*** Strictly speaking this isn't a proper guest post as it's mostly written by me, but every blog has to start somewhere, and hopefully this will inspire one or two of you to join in ***

Roughly one year ago, not long after I'd moved to a new town, a friend took the time to write to me. I don't get many letters, so that made it special enough, but it was also about a bookshop, meaning I've been wondering what to do with their letter ever since.

As I've not yet visited the bookshop I didn't feel I could include it on the blog. However, the friend met my requirement of spending money in the bookshop they visited (and even better they were buying a gift for me) and so – after a very large amount of thought – I've launched a guest blog section.

Obviously the friend didn't expect to have their letter quoted on the internet, whereas I hope future guest bloggers might be willing volunteers, so '...' indicates my editing, but here's a brief glimpse into their bookshop experience in Wales.

I have at last found time to sit down and write to you, firstly to wish you happiness in your new abode... 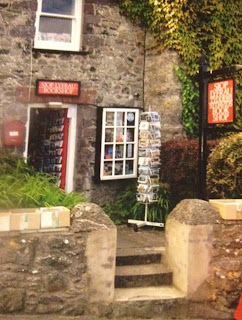 Secondly to send you bumpff on the St Davids Bookshop, which you may find of interest. I thought the moment I saw it that it would probably appeal to you. I went inside and was chatting to the owner... I explained the nature of your blog and he told me the Guardian had already been there, before sharing some of the family history: he's an ex-mayor of St Davids, and his family owned the whole block of buildings since the Norman invasion. I said your blog was far more interesting and probably had a larger circulation than the Guardian... [this blogger couldn't possibly comment]

Then I bought a book... To Kill a Mockingbird, which I guess you may have read already... 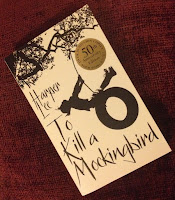 The letter included a couple of printed photographs and fliers, along with the copy of To Kill a Mockingbird by Harper Lee, which I had already read but didn't already own. It was a welcome addition to my bookshelves and as a whole the letter is among one of the best I've ever received for thoughtfulness.

And Mick was right, St Davids Bookshop definitely appeals to me. 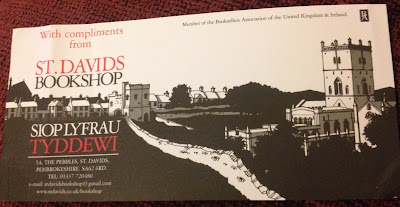 *** Please note, the 'rules' of this blog are that money must be spent in the bookshop before it can be written about, I don't expect guest contributors to buy a book for me. That's just a happy side effect of this particular post ***