It's the first month of the year and we're all desperately clinging to the remains of our failed resolutions, and so I've signed up to a 'challenge' that isn't really a challenge to me (and really shouldn't be too difficult for you either).

At least, not in the sense that it's something out of the ordinary. You see, I've signed up to the 2016 Classics Challenge, but I grew up on classics. Not because I was clever or well-read, but because at the time I first began buying books for myself Penguin had launched their £1 Penguin Popular Classics range. And if like me you were a skint, book-loving teenager in the 90s you'll know there really wasn't a choice when the options to buy ranged from a modern book for £6.99+ or a classic for £1.

I've since learnt that just because a book is a classic it's not necessarily readable (I advise you to steer well clear of Gulliver's Travels or The Water Babies), but the first pound classics I picked up happened to be really very good, which ended up influencing my reading for many years to come.

Among the titles I devoured in my late teens were The Age of Innocence by Edith Wharton, which has become my all-time favourite read; The Secret Garden by Frances Hodgson Burnett, even better as an adult than in my childhood years; and Tolstoy's War and Peace, bought purely because it offered the best page-to-penny ratio, loved because of everything I experienced while reading. 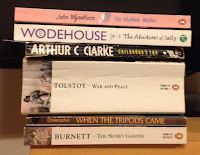 All of which makes it seem a bit unnecessary for me to sign up to a classics challenge, but the simple truth is I like to get involved. I also like to shout about my favourite book wherever possible, and as this challenge offers opportunities for both it would be a little daft of me not to join in. 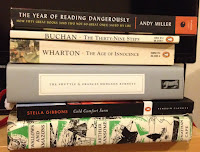 At the moment I have a vague plan of the classics I plan to read for the challenge, but as my reading mood changes the list may also be subject to variation. Essentially, don't hold it against me if I don't end up reading what I set out to complete.

You'll see from the pictures I've gone for a diverse selection of classics, with a little crime, comedy, love, war, children's and science fiction all thrown into the mix, because in my eyes a classic is a book that has or will stand the test of time, but really the classics 'genre' is so large I don't see how participants will be able to limit themselves to just one per month.


As I'm yet to buy the last book, I've instead photographed Andy Miller's The Year of Reading Dangerously (acquired here), which is the reason I'm determined I must finally read Moby Dick.

I started the challenge with The Shuttle, published by Persephone, which I finished reading last night. Telling the story of unhappy marriage, it's a beautiful, uplifting read but certainly doesn't live up to any stereotypes, however as I'm no book reviewer I'll direct you here to find out more.

With that thought in mind, I admit it's unlikely I'll blog about every classic I read for the challenge, however I will be taking part using the #2016ClassicsChallenge hashtag, so if you'd like to find out how closely I stick to my proposed list, take a look on Twitter. Also, if you're looking for classic inspiration drop me a line or tweet, I'm always happy to make recommendations.

Meantime, I'm busy choosing my February classic. I've not decided which one from the list it will be, but while I make my mind up I'm treating myself to another favourite read: Treasure Island by Robert Louis Stevenson. One of my go-to books when I need to escape, it also happens to be a classic...