Young Writer of the Year Award 2016

In just a few days, the latest Young Writer of the Year will be crowned. Last year, when the Sunday Times and Peters Fraser & Dunlop relaunched the award, it opened my eyes to the appeal of book awards and so this time around I was particularly excited to find out who was on the shortlist.

Their names were revealed a few weeks ago, with a Shadow Panel of judges having already selected their favourite, so I'm not telling you anything new with this blog, but that doesn't stop me from wanting to share my – non-book blogger – opinion. 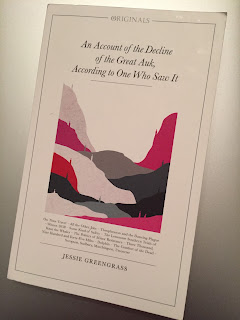 An Account of the Decline of the Great Auk According to One Who Saw It, by Jessie Greengrass
Before reading I was told this is a collection of stories about loneliness or being out of place. It made me apprehensive. Then I heard Jessie read one of the stories and knew I had to read the rest of the book straight away. There's lots I could say to praise this book, but instead I'm going to focus on just one story: the one the collection is named after. It's been a couple of weeks since I read it, but I cannot get this story out of my head. At time of reading I was tired and took it in simply as a fascinating tale about the decline of the great auk, but once my brain had taken the time to process the words I'm increasingly struck by how clever, pointed and well-observed this allegory for the modern world is. I look forward to reading much more by Jessie Greengrass. 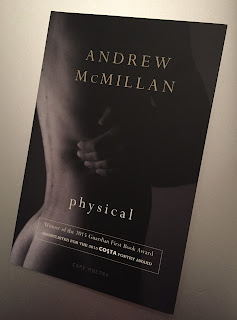 Physical, by Andrew McMillan
Described as a book of "raw and intimate poems about masculinity and male desire", this collection is both sensual and surprising in that I confess there's no way I'd have picked it up if it wasn't on this shortlist, but I feel my reading experience is the better for having done so. The poetry of Andrew's words is so much more than their arrangement on the page and their lack of punctuation, but in startling, moving couplings that catch at your heart and stop you in your tracks. From hearing him read Urination aloud, to my quiet reading of Things men take, this book feels like being set free, even in instances when freedom is not an option. 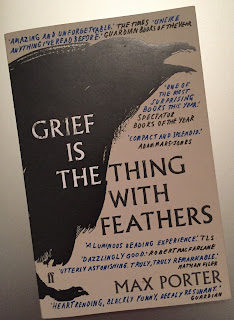 Grief is the thing with feathers, by Max Porter
Surely the book of the year for how much it has been talked about, I've previously mentioned my dislike for Max's work even though it's remarkable. It's brilliant, but it's an exploration of grief. The words peck at you and open your soul to the pain of loss that can rarely be explained to those who haven't experienced it for themselves. If I could, I'd encourage everyone who's yet to experience (or has only very recently experienced) loss to read this book to give them some small chance of understanding the process. However I'd also like to lock it up never to be seen again: I want to protect the innocent from knowing and as for those who do know, I want the crow to stay away. 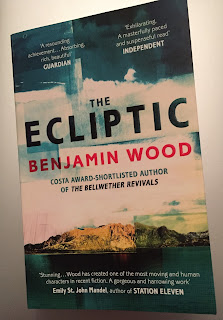 The Ecliptic, by Benjamin Wood
Possibly the book I was least enthusiastic about reading when the shortlist was announced, I saved it until last and have to admit I've not quite finished reading, yet. The book begins as the story of an assortment of writers, artists, musicians, etc who have retreated to an island near Turkey. Despite my initially having no interest in reading this book, it had me hooked by the second page and I'm having to tear myself away to return to real life. Initially it was the language that drew me in, but the twists and turns and revelations soon saw me enjoying this for the sheer pleasure of losing myself in a good story. Now I need to go and find out how it ends...

As I've read each book I've been certain that each one was the winner, so now I sit down and type I find myself trying and failing to choose a winner. Do I go for the most startling? Engrossing? Moving? Unsettling? And which word am I referring to which book? How anyone could select just one winner from this expertly-written selection is beyond me.

The winner of the The Sunday Times / Peters Fraser & Dunlop Young Writer of the Year Award 2015 will be announced on the evening of Thursday, 8th December.