This week's guest post is a second appearance for a European guest blogger. Previously, Eric has introduced us to one of his local bookshops, but this time he's on tour to Ghent.

A taste of bookish Flanders: Limerick

The great thing about missing your train at the beautiful Ghent-Sint-Pieters station is that you get a chance to visit a special bookshop: Limerick.

Ghent is a great city in the Flanders Region of Belgium and is known for its well-preserved medieval architectural remains like the Gravensteen castle and the Saint Bavo Cathedral. Of course there is also the famous Ghent Altarpiece (or the Adoration of the Mystic Lamb attributed to the brothers Jan and Hubert Van Eyck). 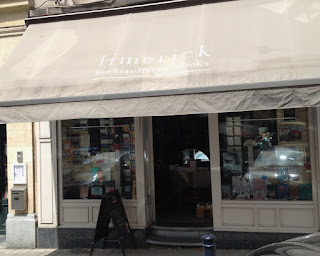 But for me Ghent is also known for its Ghent University, my alma mater, and bookshops, bookshops, bookshops... The question was which bookshop from Ghent should appear on this blog. Which one has that special story? Difficult to choose but it would be a shame not even to consider what is, among Flemish booklovers, a well known shop called Limerick. One of the main reasons is its current owner Gert. If you were to organise a masterclass ‘independent bookshops’ it would be a capital mistake not to include him. Why, I’ll give you some reasons. 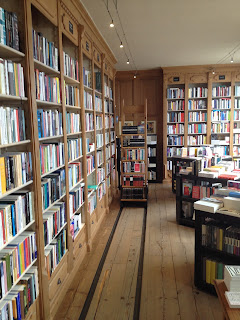 First reason is the fact that very often book launches are organised in the shop or in some other place in Ghent. Gert has a nose for talent and also encourages hard working authors. It must be a great feeling for a writer to talk about your work at this shop where bookish Flanders meets one and other. Gert knows his customers and just feels what will be a success or which author needs that special attention. The reason why is simple, you just know he loves books. When you enter the shop, you’re among book loving friends.

Second reason is that the shop, which looks modest from the outside, breaths an independent style and choice of books. There is a great chance you’ll see a recently published book that other bookshops have overlooked. Most often the book is on display in the shop before it’s gotten a review in the literary supplements. The shop also needs a regular visit because sometimes a selection of books is modestly sold with a famously known discount.

Third reason is that the shop looks modest from the outside but once you’re inside you enter a well-organised painting of books. Like a Flemish masterpiece. It needs to be looked at but it inspires. It gives you the feeling of looking at hard labour. Everything is organised and does not change. The amount of books is quite big but you know where your classics are, philosophy, psychology, history, literary magazines and so on. Gert also invests in a real poetry corner, a choice one has to admire. I also like the wooden interior. Briefly, a place where a booklover just turns to a relax modus.

It is a typical, but logical choice for Belgium, that this shop has books published in different languages: Dutch, French, German and a very large English collection. But, and here comes your fourth reason... it also has a significant selection of books in Swedish. Very unique if I may say so. Gert found it a logical choice when I asked him the reason for this daring option. There is the university and the Swedish language is taught at a local evening school. I think it is just great independent thinking. 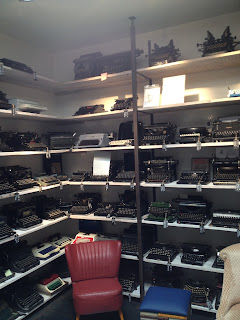 Not convinced? Well the fifth reason will presumably persuade you. During my last visit I witnessed a lady who was surprised by what she saw in the back room of the shop. A room full of typewriters. Not an ordinary collection, but “the collection” once owned by the famous Dutch author of novels, poetry, plays, essays, Willem Frederik Hermans (1921-1995) (The Darkroom of Damocles, Beyond sleep). The typewriters are arranged along bookshelves and found a perfect home after a competition for the collection which the shop won. I like this author a lot and so does Gert, who always keeps a large collection of his books in store. Every time I visit the shop I take a look at this room and dream of books and publishing them. 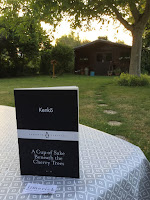 Thank you very much to Eric for introducing us to another European bookshop gem. Eric purchased Kenko's A Cup of Sake Beneath the Cherry Trees – further proof of the English language titles to be found in what sounds like a wonderful bookshop.