Leaving my comfort zone for #BAMB

As it's no secret I'm a bit of a fan of bookshops, I decided the best way to experience the launch of the Books Are My Bag campaign was to take in a couple of places I wouldn't necessarily have visited on an ordinary bookshopping trip.

And so I choose two opposites, bookshops which at first glance appear to be at different ends of the social spectrum and ones I'd not rated particularly highly on my 'expect to fit right in the moment you step through the door' scale. Not because I wasn't interested - their concepts fascinated me - but if any bookshop was to live up to the intimidating persona I'd applied to them back when I was a young teenager one of these was bound to be it.

However, just as the book token of World Book Day gave me confidence to enter my first bookshop, so the awareness campaign of Books Are My Bag gave me the push (excuse) I needed to once again enter the unknown. 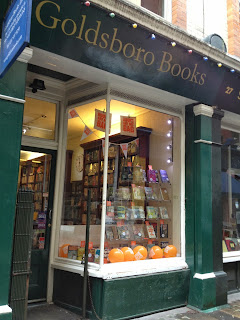 My first out of comfort zone bookshop was also the first stop on my bookcrawl: stockists of first editions Goldsboro Books. And the word first is the reason I was so uncertain of my destination, after all just how expensive would a first edition be?

I'd heard of books selling for hundreds, and have even seen a few myself back in the day when I volunteered in a charity bookshop, but the thought of going into a place filled only with first editions made me nervous. I have a rule that if I'm going to write about a bookshop I must buy something in it - I wasn't sure this was something I'd be able to afford to do at Goldsboro.

And so I found myself dawdling as I made my way along Cecil Court. An area I'd not previously explored despite its proximity to Charing Cross Road, I was surprised to find it filled with even more bookshops to tempt me - on any other day I'd have happily lost several hours exploring , but today I was on a mission.

Along I went to the Books Are My Bag decorated window of Goldsboro Books and the selection of Harry Potters it revealed. Still nervous, I entered the shop.

The first book I spotted was priced around the £50 mark, but despite stocking a large number of expensive books, Goldsboro is still essentially just a bookshop (yes, I know it’s wrong to use the word just in relation to a bookshop) and so - thankfully - it took precisely ten seconds for me to realise my fears had been for nothing. 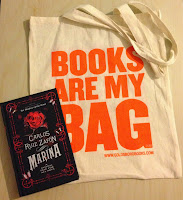 I couldn’t help but be fascinated by the selection on offer, marvelling at the covers and featured authors, so that before I knew it I was happily chatting away with the bookseller as the striking cover of Marina by the wonderful Carlos Ruiz Zafon caught my attention. Signed and numbered and so new to Britain I didn’t even know it existed, I couldn’t believe my find. I was also relieved to discover this beautiful book was on sale for the cover price, so cancelling out my fears of living off beans on toast for the rest of the month.

Book in glorious orange bag and fears of the expensive well and truly quashed, I happily made my way along Charing Cross Road for a little more bookshopping, before ending up in Bloomsbury Street at my next unsure of destination: Bookmarks.

Not an obvious establishment to pair with Goldsboro Books, Bookmarks is also The Socialist Bookshop, and so here my fears were of my own ignorance.

As someone who feels very strongly about the vote but doesn’t choose where to cast it until the day of whatever election is taking place, I’d known that while I wouldn't be completely lost here I could potentially stand out as not being socially aware enough.

Would I walk into the shop and have my ignorance rubbed in my face as I failed to register knowledge of the issues? Would I even find a book I could realistically buy as subjects beyond my comprehension (or even sphere of knowledge) lined the shelves? The answers regarding my understanding are probably both yes and no, but after an initial moment of awe I soon found myself on a mini educational tour. 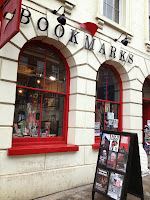 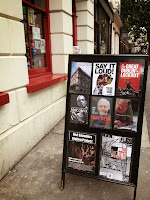 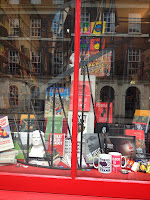 With the books organised by theme and geography I took a journey around the world, wandering past the spines, picking up the names of inspirational people, horrific events, revolutions, campaigns and everything in between. There was even a suitably selected fiction area, filled with books to entertain while also making you think. However, instead of loitering in the relative safety of fiction I found myself drawn to the Middle East, an area that often makes headline news but is rarely explained to any satisfactory level in the allotted television time segment. 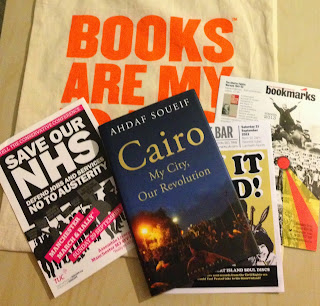 And so I picked up Cairo, My city, our revolution by Ahdaf Soueif, a fiction author who here retells her personal account of being part of the Arab Spring. As I read in the shop I found myself caught up by her determination to make a difference and I’m sure it will be a fascinating and educational experience.

In fact, so engrossed had I been in my exploration of the issues that it wasn’t until I got to the till that I noticed the total absence of BAMB decoration due to a technical hitch. Not one to let an absence of free stuff put me off the good fight I still wanted my book, and was rewarded for my decision when later in the day the bookshop contacted me to let me know the tote bags had arrived and they’d keep one aside for me.

While all bookshops help broaden the mind, Bookmarks goes above and beyond to highlight issues and educate, but not in a way that alienates the everyman. With more time I could happily spend a good few hours in the shop on a journey of self-education, safe in the knowledge I'd be welcomed and later leave with books that would take me on journeys to very different - but very real - worlds.

My bookshop crawl continued with many more old and new experiences, but the very different establishments of Goldsboro and Bookmarks stood out for me because they were so opposite to my expectations. They were reminders of something all book lovers know: you shouldn't judge a bookshop by its cover.