A first encounter with Doctor Who

In honour of the recent 50th birthday of The Doctor, last weekend I decided to take the plunge and finally start reading my first ever Doctor Who book. 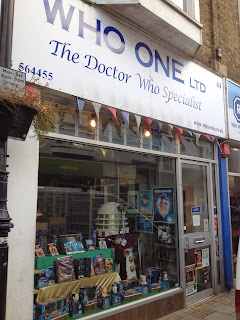 I'm not generally a book snob, I've read pretty much any style of writing I can get my hands on, but - despite a childhood love of the television programme - Doctor Who is a, er, genre(?) I'd not previously considered reading.

Whether that's because I've never forgiven the (I think) seventh Doctor for the nightmares that once kept me up half the night (something to do with zombies and a church, I probably didn't hide behind the sofa enough during that episode) I couldn't say, but if I hadn't found Who One in Ryde on the Isle of Wight I'm not sure I'd ever have gone down this line of reading.

And so, stood outside the shop, eyeing up a suitably scarf-wearing Dalek, I realised this was possibly the first bookshop I'd ever entered with a feeling of total ignorance. Mostly because I was unsure if it would class as a bookshop in my mind when weighing up the balance of other Doctor Who items on sale (there was a lot of merchandise for fans), but also wondering if I'd even find something I wanted to buy - two quite important factors when deciding whether or not to feature the shop here.

For the first concern my question was answered pretty quickly as a large wall of books greeted me, looking rather fine in all their modern artwork but with some original books thrown in too. For the second I did what I'd do in any good bookshop: I asked for help. 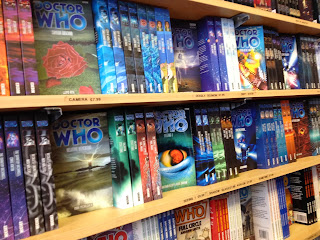 Contrary to the popular stereotyping of Doctor Who geeks, the only man around was behind the counter, was perfectly capable of talking to the various women in the shop, and wasn't wearing a Tardis. In fact, he was just as friendly and approachable as any bookseller with a passion for their subject and didn't bat an eyelid when I asked him what I should buy.

Just inside the door was a bookshelf of secondhand books (most of which had been so well looked after they could easily have been returned to the new bookshelves), and so as a newcomer to the genre I'd managed to narrow down my choices to this smaller, cheaper, selection, but beyond that I had no idea where to start. The bookseller asked me a little about what I might be interested in, and we managed to narrow it down to me not wanting to read about the Cybermen and generally being a bit of a wuss.

After some more questioning he reduced the search to Doctors from the 1980s and soon began picking out a selection for me to choose from, recommending a variety of storylines or authors and telling me a little about each one. I was both grateful for his time and impressed by his knowledge.

Eventually - after what must've been a lot of patience on his part - I chose Palace of the Red Sun by Christopher Bulis. An adventure featuring the Sixth Doctor and Peri (neither of which I could remember at the time of purchase), its cover blurb boasted an unscrupulous reporter, fanatical gardeners and the threat of an interstellar tyrant, what more could a reader ask for?

And so to the book. I'm only halfway through at time of writing, but I can't put it down.

It's well written and the story is captivating, but the thing that gets me the most is that - once again - I'm encountering books that are judged very much by their cover, or television series, or geeky stereotyping. 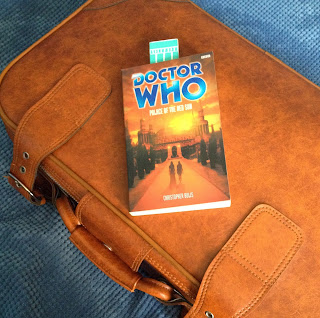 I hadn't really had any particular expectation about the genre (I can't think of a more appropriate way to describe it) but if anything I'd possibly anticipated a cross between science fiction and crime and thriller. So when among the robots and spaceship-wielding bad guy I encountered a girl having to choose a husband and some kind of sprite that looked like a teddy bear I was surprised to realise how balanced the book is between the stereotypically male and female themes of action and fluffy stuff.

In short, it's the kind of book I'd happily recommend to just about anyone I know, certain they'd each find something - probably very different - to enjoy.

I'd try to explain more but blogging is eating into valuable reading hours and I sadly don't have a Tardis to travel back in time and post this at an earlier date...

PS For reference, I have no idea if it's a controversial thing to admit but my favourite Doctor from memory is Peter Davison (I was only four when the fifth Doctor stepped down), and my favourite companion was Ace (who travelled with Doctor number seven). My favourite storyline, after some research, was Paradise Towers. If we jump to modern day then it has to be Christopher Eccleston and Matt Smith's current companion, Clara Oswald.
Posted by Erica at 07:39

Email ThisBlogThis!Share to TwitterShare to FacebookShare to Pinterest
Location: Ryde, Isle of Wight PO33 2RE, UK