After the gift, a lesson is learned

A few years ago, someone gave me a book. Believe it or not, this isn't a common occurrence. The reason for this could be because I own a significant number of the things and people don't want to buy me something already on my shelves, or it could be because I've no idea who gave me this particular book and others don't want to suffer the same lack of recognition in later years.

Despite this instance of forgetfulness books are one of my favourite things to receive as presents, in particular if they happen to be the favourite book of the giver, surely one of the most special – purchased – gifts you can receive.

Hopefully the buyer will forgive me when I explain that while their name may be forgotten, their gift still had an effect: I'm not about to attempt to review the book – I'm not that kind of blogger – but, where other encounters with Australian based or produced fiction have failed to move me, this book grabbed hold and wouldn't let go, fascinating and frustrating and gripping me until the last page and reigniting my interest in the country.

And the only reason I read it is because the book had been a gift.

After the fire, a still small voice by Evie Wyld not only transformed the way I feel about literature set in Australia, reminding me I shouldn't be so narrow-minded, but it also sent me on a quest to visit, of all the places in the world, Peckham. 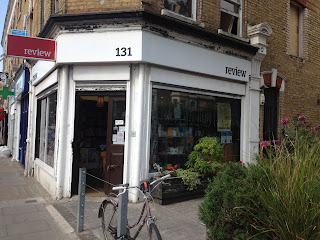 Why? To go to a bookshop, obviously: Review Bookshop is less than a five minute walk from Peckham Rye Railway Station and author Evie Wyld can occasionally be found there.

Typically – understandably given her book commitments – the author wasn't in on the boiling hot afternoon of my visit, and so my copy of her first book remains unautographed, but that in no way diminished my experience as I stepped into the welcome cool of the bookshop (in both temperature and attitude). 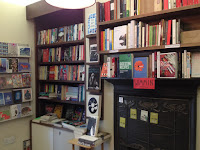 From the section labels on the shelves to the 'brilliant local things' and determined recommends section, Review Bookshop is effortlessly cool. Even the music wafting into the bookshop from elsewhere was cool, as I wandered into the back room of fiction enjoying The Who as my soundtrack. 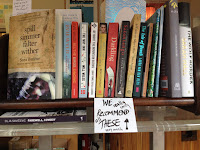 Books are cleverly placed to catch the eye, with extras such as the 'nice little bit of sci fi' which made perfect use of its space, or 'wimmin' lined up along the fireplace. Then there's the old school desk in the children's section and other randomly interesting items scattered throughout the bookshop, all of which create a place where people can comfortably hang out... and that's before they take their books outside to enjoy in the garden.

It may not have been cool of me to initially visit only because of the bookshop's links with the author, or to confess my previous narrow-mindedness regarding fiction set in Australia, but as I've learned the error of my ways hopefully some forgiveness is allowed? 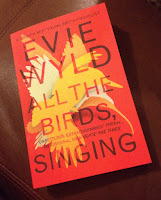 If not, at least I came away with a copy of Evie Wyld's second book, All the birds, singing.