The book was better, but there's more to it than that

*** In the following post I briefly talk about scenes within The Martian book and film. As far as I'm aware the references are innocent and they are not spoilers, but read at your own peril ***


We can't all live close to an independent bookshop, but many of us do still have a bookshop around the corner.* 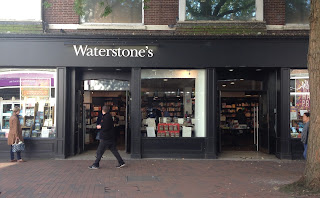 In my case it's part of a chain, but in the year or so I've known it Waterstone's in Tunbridge Wells has become one of my regular hangouts. Particularly at around 1.30pm on a weekday, when I find myself in need of an escape from the office, and a moment to stop thinking and sort of re-set my brain. 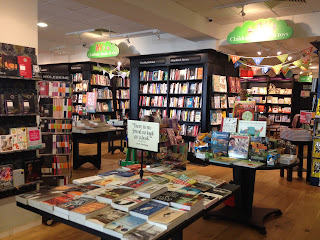 At these moments I like to dawdle through the shop, enjoying the temptations on the recommends tables before heading upstairs to a large, quiet area crammed with fiction. Here, I start at the wall of bookseller recommendations (reminiscent of the days of Ottakar's) then move on to browse each table as I randomly gravitate towards the crime, sci fi or general fiction shelves as the mood takes me. This inevitably leads to some relaxed reading – followed by rushed buying as I hurry to return to the office, unable to leave the book behind. It's a lovely way to spend a lunch break and always sets me right.

It's also very handy when I suddenly get it into my head that I absolutely must read a particular book, for instance The Martian by Andy Weir.

Seeing the trailers for the film, I asked Twitter if I should read the book first and in a break with tradition opinions were split. Half of you said yes, it's brilliant. Half of you said no, the science is too much. And a few more of you** said other clever things that I can't remember right now. The general outcome being that I wanted to read the book more than ever. Most importantly, I wanted to read it before the weekend as that was when I planned to watch the film. 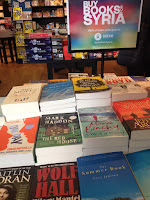 And so I made the most of the excuse to visit my local bookshop. As Waterstone's is running a Books for Syria campaign I also felt compelled to break my one book per visit rule and buy We are all completely beside ourselves by Karen Joy Fowler.

But back to The Martian. The moment I got home I sat down to read, finally resurfacing for a break six hours later. The easy-to-read book fascinated me and the science had me hooked. It was no trouble to finish before my self-imposed Saturday night deadline and before I knew it my 3D glasses and I were at the cinema.

Having read John Irving's book My Movie Business, I like to think I've become sympathetic to the adaptation of books into films, accepting omissions and changes as a necessary evil (although why the film has to start on Sol 18, when the book starts on Sol 6 is beyond me, and don't get me started on Venkat/Vincent Kapoor). Basically, as long as the essence of the book is captured I'm happy, which is pretty much what happened here. However that doesn't mean I'd be happy to watch the film without having read the book.

You see, the joy of going to see a film adaptation of a favoured book is that you get so much more from the scene you're watching than just the action in front of you: When Mark Watney starts growing potatoes in the film I also understood how much effort his character had gone to to get to that point – because I had read the book. And when Rich Purnell is introduced I was quietly sniggering about his awkward character before the person sat next to me had even worked out what was going on. There are many more instances where my enjoyment of the film was heightened because of such extra knowledge, with the inevitable divergent annoyances thankfully at a minimum, meaning I'm now praising both book and film to anyone who's willing to listen. 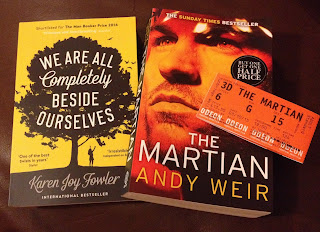 And all this enjoyment is thanks to my local chain bookshop, which may not be an original independent but certainly captures the essence of the book-buying experience.

* I've already written about my thoughts on chain bookshops, so to avoid repetition have a click here.
** I like science, but I don't pretend to be any good at maths.
Posted by Erica at 23:11