This is my journey

Several months ago, some of you may remember I went on a bookshop crawl around Hackney in celebration of the 2015 Books are my bag campaign. As is my habit, I wrote about the event the following week and have been gradually sharing more detail about the individual bookshops involved.

Then it came time to write about Stoke Newington Bookshop and I kept getting delayed: First I wanted to finish reading the book purchased on the day; then I deliberately delayed because I wanted to meet their occasional bookseller puppy (still to be done); and finally the randomness of other events got in the way. So, better late than never, and with apologies it's taken me so long, we arrive on the doorstep of this large east London bookshop... 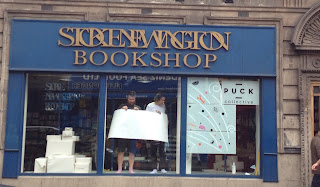 My first thought when stood outside was – I'm ashamed to admit – is that it? But with good reason: Despite my having now participated in several Books are my bag events (see here and here), time and a total lack of organisation mean I'm yet to have attended a bookshop party in progress. Until now. And the party was so much in progress that I'd arrived just as the bookshop's artists in residence for the day had taken down the window display they'd created and were starting work on their next offering. (It looked great when complete, if only I'd had the presence of mind to take a photograph.)

However, as we all know, you shouldn't judge a bookshop by its (temporary) cover, and so I stepped inside, full of enthusiasm for what I was about to find. And the first thing I found was that my picture of the front window simply does not do justice to the size of Stoke Newington Bookshop, which is huge.

The wide open space, large number of customers and multicoloured books mean the choice of blue for shelves and tables is soothing and a perfect balance to the brightness of the room. The abundance of recommends tables means progress around that room is slow (and that's before you spot the music section and discount books). I dawdled my way from one table to another, enjoying the bubbly atmosphere around me as I devoured the backs of books. 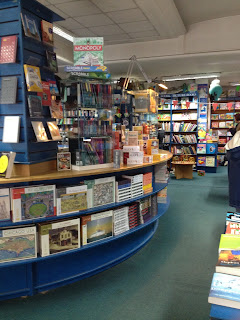 One table contained hand-written recommendations that ensured I wanted to buy every book on it, while another paired new reads with the earlier titles that had inspired them. It was from here that I was to choose Ben Aitken's Dear Bill Bryson. Given the – in the opinion of some poor souls – strange path my own travels take, I was naturally drawn to another adventurer setting off on a specific but random journey.

The book follows in the footsteps of Bill Bryson's Notes from a small island and more than lives up to expectations with its honest approach to the delights – or lack of – encountered on the journey.

While I shamelessly admit my travels focus only on the good, there was no difficulty in finding good everywhere I looked here: There was a variety of stock to compete with any large chain, and the sense of community and welcome would certainly be unrivalled. The booksellers were chatty and friendly and the party atmosphere had the air of being a standard Saturday, with the fun extras simply an added bonus. 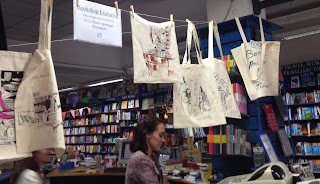 In fact, I was so engrossed in enjoying the bookshop proper, I failed to get a good look at the efforts of the artists in residence scattered around the shop for the day. Away from the shop window, one or two could be seen sitting in out of the way corners, working on what looked to be canvases, but despite my best attempts to be nosy I never quite got near enough to see what they were doing. Then I eventually went to the till to buy my book and spotted a tote bag with me on it: all became clear. 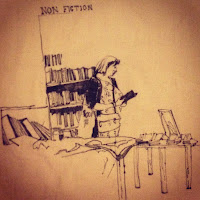 These particular artists were sketching bookshop life as it happened and one – I later heard it was two – had captured me on canvas. It was a wonderful surprise and an extra special memento.

Unlike Ben Aitken, I may not have anyone's footsteps* to follow in, but such random loveliness as that encountered in Stoke Newington Bookshop is an excellent example of why I'm having so much fun on my own journey. It's also a great reminder to anyone who's uncertain: Bookshops will always be my bag. 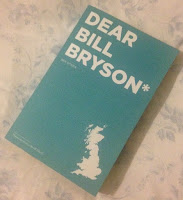 
*As Driff's guides appear to have had a slightly different aim to mine – and I still haven't found one to buy – I'm not counting him.
Posted by Erica at 01:22