All are welcome for late-night bookshopping

The weekend just gone saw me on a last-minute trip to Stratford-upon-Avon. Despite many years studying English, this was my first visit to the town and I was completely unprepared.

Other than a place to sleep we had nowhere to eat, no knowledge of what tourist attractions were on offer* and no idea about the town's bookshop status. As you can imagine, the latter was the most aggravating.

We arrived early on the Saturday evening, at exactly that moment when the town is starting to quieten down as theatre-goers take their seats and shoppers recover at home. It was a lovely time to begin exploring, but not a good time for randomly finding a nice restaurant with a table going spare. Instead we took the opportunity to wander and locate all the important destinations: bookshop, check x2; visitor centre, check; and eventually a very nice restaurant which offered us a late table.

But what does all this have to do with the bookshop blog? I hear you ask. Well quite a lot as it happens. Because although we found two bookshops, the discovery occurred long past closing time. Which meant the chances of me (legally) getting inside either were slim to none, especially given one, Chaucer Head Bookshop doesn't open on Sundays (I'll be back). 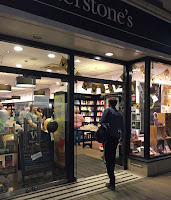 That left me with the friendly neighbourhood Waterstones. We've already established I like all bookshops, but by now I'm sure you've noticed my priority is to visit independents unless there's something really special going on. Well what could be more special than accidentally finding myself outside a bookshop that's open at 11pm on a Saturday night? Late night openings are not exactly a common occurrence, but for those of you who haven't realised what day it was: Harry Potter and the Cursed Child launched an hour later at midnight.

As I'm not a massive fan** I'd completely lost track of the launch date. I knew bookshops around the country would be opening especially to unite fans with the latest book but it hadn't occurred to me to find out more and go along because I'd felt like I'd be intruding on the Potter fans' excitement.

However, when I found myself outside an open bookshop late on a Saturday night I realised it was impossible for me to stay outside.

The bookshop was buzzing. It's not often I see this level of crowd – and especially not so many predominantly young readers – and it was a joy to see. Admittedly lots were simply wandering or sitting in groups, waiting for the clock to strike 12, but many more were browsing and buying. Which is exactly what we did. 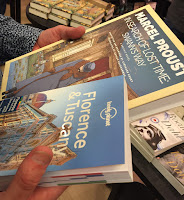 We were on a mission to find a guide book to Florence, but making the most of two floors of bookshop and weaving in and out of the crowds it was only natural we explore all two floors. This weaving saw us stumble across the graphic novels, where he also picked up a striking adaptation of Marcel Proust's In search of lost time: Swann's Way.

I'm planning on (one day) borrowing it from him in a cheat's attempt to find out what all the fuss is about.

Books bought, it was time for the main event. We found a convenient spot out of the way of the queuing Harry Potters, Hermiones and more, and waited as the countdown began. Then all of a sudden a trolly of books in paper bags whizzed past and the books were being handed out. There were smiles and squeals of happiness as the young and not-so-young eagerly tore into their packages, with one girl even doing a little dance for joy.

It was really lovely to watch and although we weren't a part of the Harry Potter frenzy we were still involved in the atmosphere and general excitement of picking up a new book. 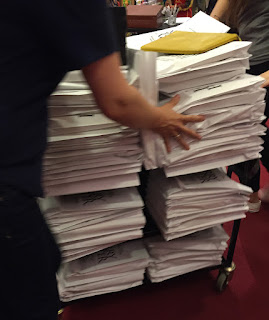 Next time a new book prompts a midnight opening I'll be there, and if you've any enthusiasm for the pleasure of book-buying I'd encourage you to come along too. The atmosphere was great, the novelty of late-night book-buying was fun and – obviously – everyone was welcome.

*Slight exaggeration, I'd heard of Anne Hathaway's cottage but I hadn't realised it was out of town and therefore not within walking distance on a lazy Sunday.
** Please don't lynch me. I like Harry Potter, but I'll wait to read the book once the hype's died down.
Posted by Erica at 18:28