One of the things that makes bookshops great is the people. The majority of the time those people are obviously the booksellers, but the customers are always pretty great too, especially when they're a new-found friend.

This week's blog is as much about one of those people as it is about the bookshop they introduced me to. 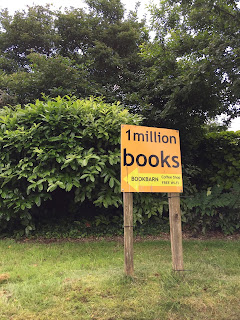 I've previously mentioned Tamzin, so you know she was kind enough to show me around Bath, what I didn't mention before is how pleased I was to be able to meet up with a random Twitter friend and realise I'd made a real-life friend too. Which I can assure you is not guaranteed when you've only 140 characters and can be a bit shy about meeting new people.

Fortunately, bookshops are great ice breakers and it was in Bookbarn International – hidden away on an industrial estate somewhere between Bath and Bristol – where our friendship was properly formed in the real world.

The bookshop is ginormous. Which is great when you're wandering around with a new friend because it gave us plenty of time and space to chatter away uninterrupted, while exploring what felt like hundreds of rows of secondhand books. It's also got a large cafe, meaning we were able to relax over soup and a drink while we carried on talking. Had there been time, I reckon we could've happily spent the whole day in this bookshop. 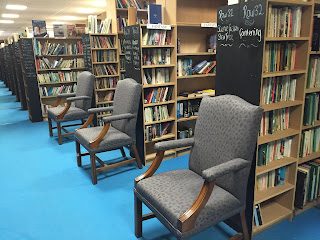 As it was we had other places to be, so we couldn't dawdle too long as we wandered up and down all those bookshelves, shopping basket in hand to fill with all the stumbled-upon books you knew you'd always wanted.

The whole place is a treasure trove, with everything from old yellow Penguins to rare books and other fascinating sections including a bookcase dedicated to cats (oh, how I could've spent a small fortune there). However I was so busy enjoying the good company and great atmosphere, I failed to find a book to buy. Even when I went to the children's section, certain such a large place must have the particular book in a series I'm slowly hunting down, I found myself empty-handed. 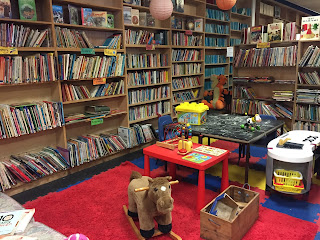 Fortunately, Tamzin pointed out the obvious: in Bookbarn International what you see isn't all you get. Extra to the rows and rows of bookcases there are whole other rooms, hidden from view, where the majority of the million books in stock are stored. It was a tiny bit disappointing to realised I wouldn't get to see those books but it's probably a good thing they're hidden away: There's plenty to keep browsers happy on the shop floor and too many books to choose from (even for book-addicts like me) could potentially be overwhelming.

Also, those hidden books are still available to browse. Tamzin took me to a collection of computers in the cafe area and helped me to understand how their stock check system works. I'll admit, when she first explained, I was a little unhappy about looking up a book on a computer – how could that be a proper bookshop experience? But once I'd typed the words "Peter Duck" into the machine, written the book's code down and then – at last – handed my slip to a physical bookseller everything was okay again. 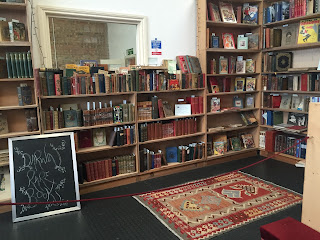 We continued browsing while my real-world human bookseller went behind the scenes to dig out my request, the third book in Arthur Ransome's Swallows and Amazons series*. Even better, when the bookseller returned she had several copies so I could choose the one I wanted according to condition, price, smell and any other criteria I wanted to use. The novelty of having a selection of books delivered to you within the bookshop setting is certainly appealing and definitely meets my criteria of sales being made face-to-face.

The extra time loitering was also well-spent, as I picked out some origami bunting and Tamzin added a little book art to her purchases.

Bookbarn International is a huge place in the middle of nowhere. While I know I'd have one day found it with the help of sat nav and a map, and would probably have eventually worked out what I was doing with the computers** the whole of this experience was made possible because a random person on Twitter was kind enough to help me out and become my friend.

I loved the size and variety of Bookbarn International and I definitely recommend you take a visit for an unusual bookshop experience, but for me the thing that makes it special is that it's where I got to know my new friend. 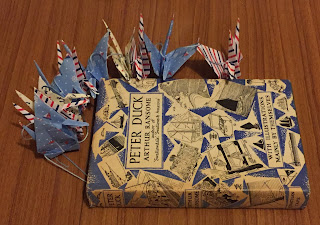 *It feels wrong to buy a series of books out of order. I already owned the first book before this blog began and I bought the second book here.

**Probably not, technology confuses me so I'd have most likely ended up doing my usual trick of hunting down an unsuspecting bookseller.
Posted by Erica at 12:59