One bright, reasonably sunny day in May, a bookshop won an award. Not an official award with a trophy or a certificate (although there may have been an official certificate involved somewhere), but an award all the same. Because this bookshop blogger officially declared it to have the best Christmas bookshop window. Which obviously makes it true. Don't believe me? See here, it's all the evidence you need.

The fact it was a finalist in a competition I wasn't judging and there weren't any other bookshops in the shortlist of three is completely irrelevant. Gulliver's Bookshop in Wimborne, Dorset, was the highest placed bookshop window in The VM Christmas Awards (and was beaten by Hamleys toy shop) so I reckon it's a winner. Everyone please give them a big round of applause.

Having said that, now I've visited the bookshop I pretty much think the whole town of Wimbourne is a winner for having such a lovely destination at its heart. 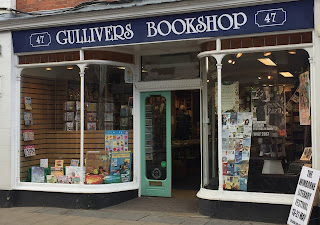 My first impression of Gulliver's Bookshop was one of friendliness and welcome. I enjoyed the buzz of customers chatting to the bookseller and no one batted an eyelid when my boyfriend made me pose for a photograph with a book about Scrabble* found on the discount table. This table was located conveniently close to the door, luring browsers in with the offer of cheap books I'd have happily paid full price for, but I can't imagine Gulliver's needs to go to much effort to encourage people in. The stock is varied and plenty, and combined with the friendly atmosphere there's a lot here to appeal. 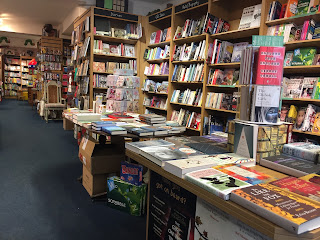 Non-fiction runs along one wall, and everything from a biography about setting up a space observatory to essays on the story of water caught my attention, with an equally diverse fiction offering opposite. It even – joy of joys – had a whole bookcase of science fiction, with titles by the likes of John Christopher and Brandon Sanderson (I bought The End of the World Running Club by Adrian J Walker). While the other end of the fiction offered a good selection of the classics. 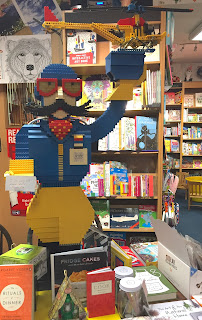 However towards the back is a bigger surprise, with a large mechanical Lego figure welcoming children to their area of the bookshop. Okay, so Lego doesn't make a reader, but I can't be the only one who thinks this is a great combination, I'd certainly have loved such a diverse children's area when I was younger (if I'm honest I still loved it today, I couldn't contain my excitement when the Lego man was actually switched on).

Gulliver's Bookshop is family-owned, and I was lucky enough to find out more about the various generations' dedication to the trade when I got chatting to the booksellers. They're a welcoming, knowledgeable family who obviously care deeply about books and the community, it was a pleasure talking to them.

Finally, Gulliver's also organises Wimborne Literary Festival, if you happen to be in the area in the middle of May. 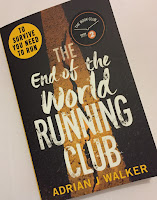 
*I suggested he might need the book if he's ever to have a hope of beating me. He took the joke quite well, probably better than he will when he realises I'm mocking him now.
Posted by Erica at 19:16