4. Learn to cook a new meal a month – SUCCESS


I love cooking but in my head I'm absolutely rubbish at it. University friends still joke about my love for Super Noodles in a pint glass and until 2016 this 36-year-old probably had more fingers than meals she'd cooked for other people. Also, I was aware a reliance on jars of sauces – which are often filled with sugar – wouldn't help with my achievements in resolution 5. It was time to take my eating into my own hands.

Each month I'd pick a recipe and cook it from scratch. Sometimes it would be from a cookbook, others were from the internet. Many of the recipes came from the Frugal Feeding website, which has become a major source of inspiration and a confidence boost for my time spent in the kitchen. I really can't recommend this website enough.

Sometimes I'd fail miserably, vinegar chicken is a dish no one should ever eat (it was supposed to be a marinade), while other dishes were so simple most people would probably laugh at them as achievements (one month saw me learn to bake sea bass), but each time I ticked off a different meal and grew more confident in the kitchen.

I was going to write a list of all the 12 recipes I tried, but I stupidly didn't make a note of them and some of the earlier ones were nice but perhaps not dishes I'd cook again. However I can tell you my favourite dish of the year was Frugal Feeding's chicken chow mein, which has become the most cooked because of its simplicity in bringing healthier Chinese food into my life. 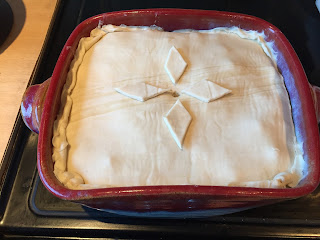 Then, in December, I finally realised just how far I'd come when I made mushroom and tarragon pie. This recipe was given to me a couple of years ago by a relative who really should be a chef, but until this challenge I hadn't been brave enough to try to make it myself.

I still can't actually believe I have cooked it, but when the day arrived my cooking challenge had given me such a confidence boost I simply got on with it and followed the recipe – and it was delicious.

I'm really proud of this achievement and plan to continue with my one new recipe a month challenge permanently.

Read next: 1. Get up in time for breakfast