Sometime around the age of ten I was given a book. There was nothing unusual about this choice of gift, except that rather than the usual paperback with a brightly coloured cover, this one was a hardback with a dust jacket. I looked at the cover and decided it must be boring, so I left it on my bookshelves and forgot about it.

Time passed and one day the 1970s film adaptation of the book appeared on TV. I have a feeling I only watched it to please the relative who'd given me the book, but the moment the 90ish minutes were over I raced upstairs and started reading.

Swallows and Amazons became one of the most-read books of my tweenage (and later) years and is still a book I regularly turn to today. It's the reason I learnt to sail as a teenager, and since that first reading I've dreamed of sailing a small dinghy in the Lake District.*

I'm yet to sail there but, finally, around 25 years after that first reading, I can now say I have visited the area. We were only there for a few days, and it being April there was a fair bit of rain, but my excitement and joy at being in such a beautiful area of the country, one that is so important to me, meant I wouldn't have cared if it snowed. I was in the Lake District with my boyfriend and I was happy. 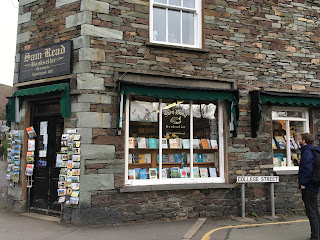 Our hotel had a view of Windermere, a short walk from Ambleside, which is conveniently where the Coffin Trail begins, an easy walk taking novice explorers to Grasmere. Having been tortured with Wordsworth's poems as a student, I couldn't care two hoots for him, his sister or his various homes, but I was very keen to visit the town for other reasons: Grasmere is the home of Sam Read Bookseller.

The walk was pleasant, included the odd gentle climb, some lovely views and – most importantly of all – the option to visit more than one tea room during its less than two-hour duration. We passed two/both of Wordsworth's former homes and some lovely little cottages, arriving at Grasmere in time for lunch. Choosing what was possibly a mostly vegetarian cafe, Green's, we realised we were the only visitors without a dog and so quickly befriended the woman at the table next to us. It was a lovely half-hour and the food and drink were delicious before we walked to the end of the (very short) road to explore the bookshop. 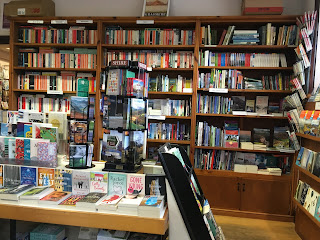 Sam Read Bookseller appears traditional and unassuming from the outside, blending perfectly into the historic countryside feel of the area. The windows could be those of a house and it could easily be missed if visitors taking the same walk didn't continue to the other side of town. That would be a crying shame because this bookshop proved to be a wonderful discovery.

Its three rooms make the bookshop larger inside than the front implies, and for an indie in a small northern village the quality and variety of stock is incomparable. 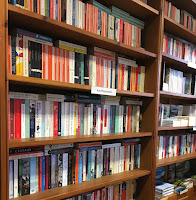 I have to admit, given the nature of the area I'd expected a raft of Wordsworths, a few Beatrix Potters and Arthur Ransomes, maps and general holiday reads. Instead the first thing I noticed was a highly intelligent recommends table in front of a bookcase of science, philosophy, biography and all manner of books to encourage people to think about the world around them. Between here and the Faber carousel next to it my boyfriend was pretty much engrossed, so this is where I lost him.

The next wall along was filled with fiction, so Sam Read Bookseller isn't a place to feel daunted if you are simply after a relaxing holiday read. The usual genres are there, with a mix of bookshop musts, bestsellers and unexpected gems to reflect the bookseller's preferences. There's even a shelf for science fiction, making this browser's smile grow even wider.

Through to the next room I was pleased to see a large selection of audio books (my new go-to entertainment in the car), as well as more non-fiction, which included a good few books on running (Parkrun is slowly turning me into a runner), and again a wide variety of subjects and titles I've not seen before. 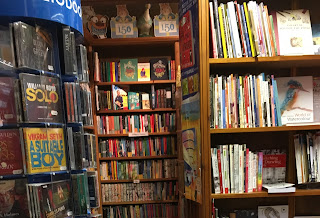 Heading to the third room, the first thing I spotted was a row of Arthur Ransomes (see low on the shelves in this picture). Turn a corner and this takes you to a cute children's area with picture books and colour and a chair for young visitors to get comfy. It's a small space but still very well-stocked. Although how anyone would manage to look any further than the Swallows and Amazons series is beyond me.

I was in Swallows and Amazons country and the next book on my way to collecting the series was the only option for me. My only regret with that choice was how many other excellent reads I had to leave behind – if only I'd brought a bigger suitcase. Contrarily, the next book I needed isn't set in the Lake District,* but Coot Club is still a part of the series and gets me a step closer to my aim to collect and read the whole series in order. My boyfriend's browsing also paid off, with him choosing Intuition Pumps by Daniel C Dennett.

We'd not yet been in the area a full 24-hours, but one thing that had already caught my attention was the lack of Swallows and Amazons references, so this was one of the things I asked about when talking to the bookseller (a fellow blogger) about books, the bookshop and anything else that crossed our minds.

I'd known Coniston Water was home to Wild Cat Island, but the gem of information provided by the bookseller was the Ruskin Museum. Not somewhere I'd expected to be directed to for Ransome, but I'm very glad I took her advice. 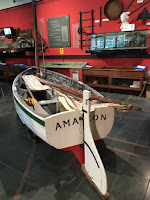 The next day we drove across to Coniston to explore the museum, which was worth the entry fee and more for one single exhibit. The Ruskin Museum is home to Amazon, previously Mavis and one of the two original boats which inspired the series. I'm not ashamed to admit I was brought to tears by this encounter with one of the two boats I've long wondered about. To be in her presence and to imagine sailing her myself was surprisingly moving. The Ruskin Museum may not be a bookshop, but I couldn't leave this experience unrecorded so I bought Pigeon Post from the gift shop.

The main reason for our journey on day one of this particular blog was to visit Sam Read Bookseller, but thanks to the kindness of the bookseller the experience became so much more than that and I hope my words have helped to give some indication of how happy all of this made me. 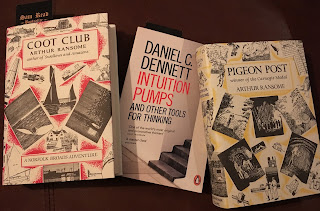 
*The series is also the reason I'd love to visit the Norfolk Broads, but that's an experience for another day.
Posted by Erica at 21:59