***This is a brief overview of my Independent Bookshop Week bookshop crawl, to find out more about the individual destinations come back in future weeks.***

Over the past three years I've done my fair share of bookshop crawls. Some have been short, some numerous, some because I was invited, but until this week only one has been in company. Which is why, an hour before I was due to get in the car ready to be waiting outside the first bookshop at opening time, I found myself hastily revising down my plans and working out a shorter route so I could make the most of more company. 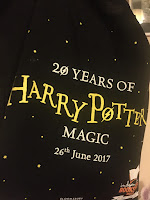 It was bookshop crawl day for Independent Bookshop Week 2017 – which included Harry Potter 20 celebrations – and my very hungover boyfriend had decided he'd like to join me for a day of bookshopping. Admittedly, he'd hinted at wanting to join me before then, but as he also wanted to watch the Lions rugby I'd not really taken him seriously. He was serious though, compromise was needed. I trimmed bookshops and changed my route, he agreed to leave the pub the moment the game finished and not be too hungover in my car. He mostly managed. 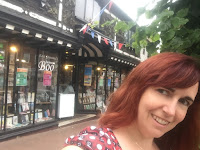 First on our list was delightfully friendly The Bookshop in East Grinstead. Shelves were assembled to perfectly complement the building within which they were housed, comprising two floors of rambling heaven and we bought from the mystery book section. Wrapped in brown paper, these books had just a few words to identify them and were part of a campaign to buy a book for a reader in need. We chose one for us, one to donate. Ours was labelled: Australia, war, affair, Man Booker, while the donation was: Books, promises, romance, small. They turned out to be The Narrow Road to the Deep North by Richard Flanagan and The Little Bookshop of Promises by Debbie Macomber. Our day was off to a very good start. 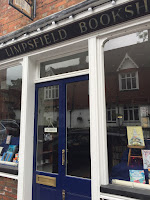 Next up we drove to Surrey, for The Limpsfield Bookshop. Having previously failed in my attempt to visit, I'd checked the opening times and the IBW website. They were definitely taking part. I was looking forward to finally stepping inside and my slightly less fragile boyfriend was looking forward to fresh air and a break from my driving along winding lanes. He got his fresh air, I was less lucky with the bookshop, which was once again closed. I'm not giving up, one day I *will* work out their regular opening hours and meet the elusive bookseller. 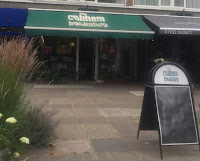 Heading west, we took a gamble with our route and were lucky enough to make good headway on the M25 to The Cobham Bookshop. Unexpectedly large, this bookshop was busy with talkative customers who kept the bookseller – and each other – busy making recommendations. We enjoyed a chat with one such customer and left with Terry Hayes' I am pilgrim. 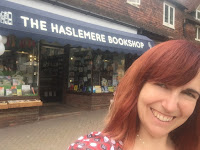 Winding roads took us to The Haslemere Bookshop, which is in an attractive market town. Fully revived, my boyfriend enjoyed taking photos of the charity fundraising display of decorated pigs scattered around the town (I'll share those later), before attempting to find me in yet another deceptively large and character-filled bookshop. Stocking new and secondhand books, there was lots to tempt me here but in the end it was the photography book Shop Cats of New York by Tamar Aslanian that won me over and prompted our conversation with the happy booksellers. 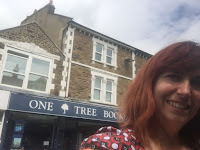 By this time (mid afternoon) hunger got the better of us, and so we paused for food at Madeleine's Kitchen inside One Tree Books, Petersfield. Possibly the healthiest bookshop cafe I've ever visited, we lost good browsing time but also enjoyed two floors of open plan browsing. I resisted the board games and jigsaws and instead bought Sapiens by Yuval Noah Harari. 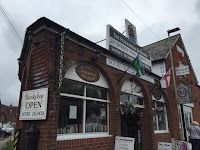 A short walk around the corner took us to the very different The Petersfield Bookshop. Home to Dilly the bookshop parrot, a range of secondhand and antiquarian books and all manner of character that I'll write about in full another time, we had a lot of fun exploring this maze. I was also pleased to find a good selection of Arthur Ransome books and extended my collection with Winter Holiday. 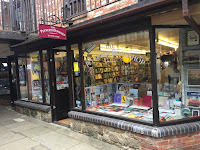 We were supposed to have two more stops after The Petworth Bookshop, but instead we arrived here in a panic, 10 minutes before closing time. A kind word from the bookseller reassured us he didn't mind our late appearance and we took to exploring the smallest bookshop we'd walked into that day – which was still a good deal bigger than your average indie. I was pleased to find Flowers for Algernon by Daniel Keyes. 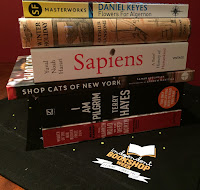 Everywhere we went we'd enjoyed the traditional warm welcome only an independent bookshop can offer. It's a shame we missed out on a few stops, but we were having so much fun in the places we did get to visit it would've been wrong to rush. It was a brilliant day and I can't wait to tell you more about all the wonderful individual bookshops we visited, just as soon as I've worked my way through my book haul...

With special thanks to the flag bearer for the day. 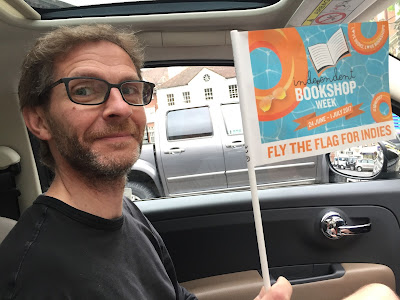