Appearances can be deceiving, sometimes

Things aren't always what they seem, whether we're talking the answer to life, the universe and everything or simply looking at a good bookshop and its books.

In the case of this week's blog, I'll stick to the latter two subjects (although surely the answer to the first is liberal doses of bookshops and books), and tell you how constantly surprising The Bookshop in East Grinstead turned out to be. 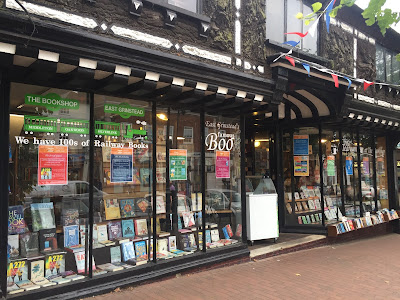 From the front The Bookshop looks massive, with large modern windows set in an otherwise historic building. These windows are packed with books inviting passers-by in to what appears to be a large space, but the moment you're through the door you're instead transported into a small, cosy, period bookshop that wouldn't look amiss in a costume drama. 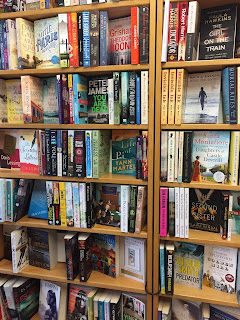 Look again and you realise the series of snug areas (including what appeared to be a very popular small cafe) squeezed in between beams and walls are actually filled with new books – this is far from the musty secondhand bookshop you'd expect from such an arrangement. The books are modern and the staff welcoming, and for me a wonderful reminder of what I'm missing out on with no immediately local indie nearby.

For Independent Bookshop Week, the booksellers had wrapped a variety of books in brown paper, with each identified by just four words that saw us almost completely unable to guess the reality from the clues. The idea was to inspire readers to look beyond the cover and genre and try something new and we certainly had fun taking part. This was also part of their The Art of Giving campaign, with donations of books being given to local charities later in the week. As I'm always keen to encourage and support other people's reading habits, we chose one mystery book for us and one to be a donation. 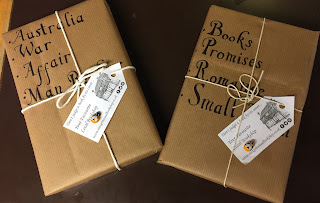 The books we chose were Australia, war, affair, Man Booker for us – because when we asked the bookseller we were again surprised to find things were not what they seemed and it wasn't A Town Called Alice – and Books, promises, romance, small town as our gift. Can you guess which books they are? Read on to find out.

Moving upstairs painted with the spines of books is where you come to the really fun part of the physical space, with a maze of small rooms (stocking the secondhand books) leading to a comfy event area and inspiring a lot of exploration and delight. The upstairs isn't massive, but the layout and content meant we could've been entertained for hours were we not on a bookshop crawl.

We completed our visit with a chat to the booksellers, who were as friendly, smiley and enthusiastic as you'd hope for, telling us more about events, books and the bookshop as a whole. It was a good start to the day and showed that in one way, at least, appearances aren't deceiving: as you'd expect from any good indie, The Bookshop is as welcoming and worth a visit as you could hope for.


Our purchases were The Narrow Road to the Deep North by Richard Flanagan and The Little Bookshop of Promises by Debbie Macomber.
Posted by Erica at 19:55