There's something really lovely about knowing I've played a part in getting a person to visit a bookshop, so when my long-suffering friend Dean dropped me a line to tell me about his own bookshopping adventure I was particularly pleased. Even if the end result wasn't quite what I'd expected...

That was the blunt and unequivocal response from my American host when I told her of my plans to walk to a book store some three miles from her home.

Having become acquainted with my stateside friend in London over the summer months, I decided to make the return journey to Bar Harbor in Maine during its blissfully chilly winter months.

The first few days were spent exploring Acadia National Park – a delight whatever the weather – and taking a wander around some of the local shops. But after failing to successfully climb a mountain the day before, I decided I would surprise my long-standing blogger friend with a write-up from the other side of the Atlantic.

Google quickly told me there are a number of book stores in Bar Harbor – some of which are in the aforementioned town centre – but where was the challenge in that? So one name – and the fact it was a good long-distance trek – stood out from the crowd: Mystery Cove Book Shop. It was the perfect trip. 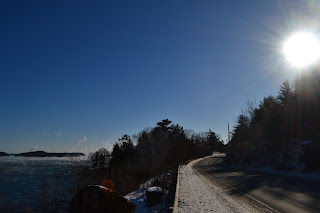 Having devised my route, I stroll to the local coffee house to tell my compatriot my plans for the day. She was far from overwhelmed considering my recent health struggles, the nature of the walk and the ever-so-chilly weather outside. Safe to say the headline “Mainers urged to prepare as deep freeze hits state” in the local newspaper did very little to strengthen my defence of the adventure.

But anyone who knows me will appreciate I am a stubborn old man (despite my youthful looks), so I made my excuses and left. 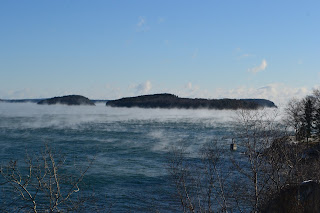 It was a journey which probably justified the “stupid and ridiculous” descriptions – safe to say it wasn’t the easiest or safest route on foot. But the only thing stopping you from doing anything is…yourself.

I got there ahead of the scheduled opening time, so spent time in the local general store, tucking into a sweet sausage sub, sipping coffee, reading the Mount Desert Islander and being astounded by The Price Is Right.

Notes were scribed onto a napkin, ensuring I mentioned my frozen moustache, the numerous lifts I got offered and my desperate attempts to avoid sounding like Hugh Grant to no avail in my book shop blog debut. 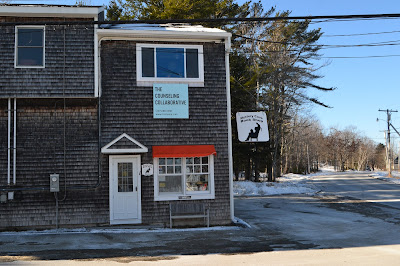 Hanging outside Mystery Cove for half an hour was not what I had planned, but as I’ve read in many of Erica’s blogs, the opening times of some bookstores is a bit of a lottery in itself – especially out of season. So I walked back with my tail between my legs, enjoying the views, celebrating returning home unharmed, but without a bookshop to review for my dear friend.

Much to the annoyance of some, my stubbornness would not allow this to be the end of the story.

As I'm sure you've guessed, there's more to this tale... click here to find out what happened next.