There's no such thing as just the one

When I was first contemplating my big bookshop adventure one of the things that inspired me to write a blog was, perhaps unimaginatively, another blog.

I’d been a crew member on a previous odyssey when my friend Pete set out to visit 1,000 recommended pubs, meaning I knew my idea (or slightly adapted version of someone else’s) had potential.

And so, when Pete announced he was emigrating north, I was one of the first to sign up to attend his leaving London drinks, even if they were in Wimbledon village, a two-hour train and Shanks' pony trip from my door. The fact there was a bookshop around the corner from the pub obviously had nothing to do with my decision.

Having travelled to the end of the (District) line on the tube, I was excited by the thought of the afternoon ahead of me and the opportunity to explore somewhere new. The walk up the (admittedly rather moderate) hill to Wimbledon village was less appealing, but knowing there was both a pint and a bookshop at the top did help with my motivation. 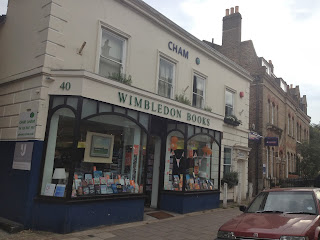 Once I arrived in the village I soon found Wimbledon Books, a little along from the Dog and Fox and just off the main road (the turning is opposite the Rose and Crown). It was probably one of the busiest of the independent bookshops I’ve visited so far, but not in a crammed uncomfortable way, with only the occasional "excuse me" needed as I swapped places with a fellow browser.

A large table advertises a selection of new releases, with a wall of fiction and recommended reads to the left and the children’s section to the right. While I didn’t fully explore the latter I did enjoy the eye-catching mobiles hanging above the displays (the one pictured had flown over to my side of the shop) and the general feeling of fun and colour to entice younger readers.

Over in the general fiction, the carefully selected recommendations caught my attention as I was drawn to Danish writer Peter Høeg’s The Elephant Keepers’ Children. And if I had any sense at all this is where my visit would have ended. I’d have picked up my book, marched straight to the till and been on my way to the pub. 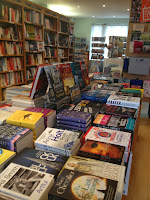 I have no sense.

I loitered, exploring the A-Z of general fiction. It was wonderful.

“It’s okay,” I told myself, “I’ve chosen a book, I have a one book rule so I can look and enjoy. I’m strong enough for that.”

Not only do I have no sense, I’m also a deluded weakling.

I looked and I fell in love. While the A-Z is comparatively small - more of a back up to the various recommended areas - the section is crammed with more tempting authors than this book addict would consider healthy. Never have I been so drawn to a bookshop's entire stock: If I could I’d have simply transfered the whole lot to my own bookcases at home.

Sure, it had a good mix of the usual suspects to rival any regular bookshop, but in among these was the widest selection of international authors I’ve ever encountered in such a small space. And I have a big, big soft spot for good translations of international fiction.

If I’d had that all important sense then maybe when I’d found the Peter Høeg I’d have realised what was to come, as he’s not a name I regularly see (or am I not looking hard enough?). But we’ve already established I’m lacking in the sense department so you won’t be surprised to read that I’d soon grabbed at least five more books, all clutched to my chest and begging to be taken home.

Don't be misled by my intellect, they weren't all foreign authors, I really was drawn to a wide selection of books, which possibly made my task all the more difficult as there was little room for comparison. However, reminding myself of my struggling bank balance, I gradually whittled my selections down to just two, as along with my original choice Tom Winter's apparently lighthearted first book, Lost & Found, simply refused to leave my hand. 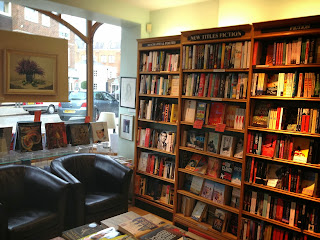 And so in an attempt to choose a favourite I made myself comfortable in one of the bucket chairs by the window and started reading. And reading. And then I realised I was half an hour late going to the pub. So I carried on reading. 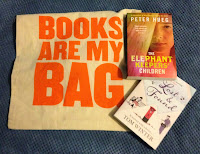 As you can see, my attempts to be critical failed. I bought both books and then, an hour late, ran away to the pub before I could buy any more.

I want to be disappointed with myself, to tell myself off and promise I won’t do it again, but the reality is it's a miracle I didn't buy more given the selection available and how great the shop was.

Sure, this may have started me down a very slippery buying slope, and it did mean I had to buy one less beer (London prices), but I think we all know which gives you the more enjoyable hangover.