Escaping from the world in a reading retreat

Sometimes, all you want is to escape, to hide in a cosy nook where you can relax and forget about everything going on around you.

Such a haven is just what I found at Wheeler's bookshop, but first I had to get there. 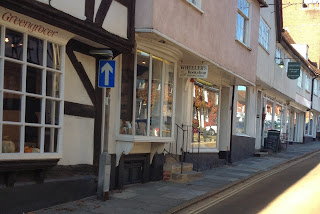 Driving through beautiful countryside on a crisp autumn morning, it was hard to believe I was just over an hour from my urban home as I marvelled at far-reaching landscapes, golden trees and a stunning selection of English country villages, linked to one another by winding lanes.

My destination was Midhurst, an attractive market town found pretty much in the heart of the South Downs National Park. Packed with independent shops and period homes (many of which I'd really like to live in if someone has a spare half million), it was a delightful, relaxing place to explore.

Not far from the high street, Wheeler's bookshop felt like a cosy retreat from the moment I stepped through the door. Its front may have been two large windows, but the atmosphere of warmth and cosiness - and the wonderful selection of books - made it easy to forget the outside world. 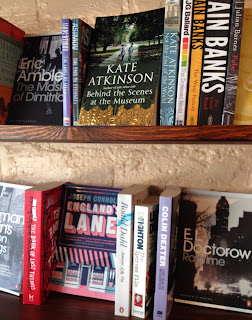 The first books I saw were, naturally, in the fiction section, and immediately the bookshop got a big thumbs up. As you''d expect this included a mix of best sellers and old favourites, but I also discovered a truly eclectic mix with the likes of Isaac Asimov, Julian Barnes and Len Deighton all sharing the same shelves. Science fiction doesn't seem to be all that common in independent new bookshops, and so to find everything all mixed in together really piqued my interest and helped me to consider a wide selection of books without having to wander between a number of different areas.

Not that this stopped me from exploring.

In the children's section, a rocking horse looked at home among the period features and must surely be a delight for youngsters - perhaps this is as much a retreat for young and grown up alike? It was near here that I discovered the first of the chairs that was crying out to be curled up in. Next to what must once have been a fireplace but was now decorated with flowers and books, I struggled not to stop and read. 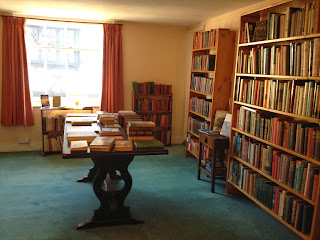 Moving upstairs, the secondhand section is found in a series of rooms decorated with books, scattered with lamps and - importantly - more sofas and comfy chairs where I could relax and escape. Larger than the shop downstairs, this area managed to feel both spacious and cosy at the same time, as each doorway opened into a new room and subject.

Aware I had to eventually leave my retreat for the real world I found it impossible to go without taking two books with me. The first was The Year of the Hare by Arto Paasilinna, a book about leaving everything behind somehow seemed an appropriate purchase for such a country retreat, at the till it was then praised by the bookseller too, reaffirming my choice. (Incidentally a lovely conversation revealed her to be the mother of the current owner, who had taken over the family business, have I mentioned how much I love chatting to booksellers?) My second purchase was Books Do Furnish A Room, taken from the fireplace display, it's served as a reminder of this stunning bookshop and also an inspiration in my own home (aka an excuse to buy more books).

Now I just have to use that second book to create my own reading retreat at home. 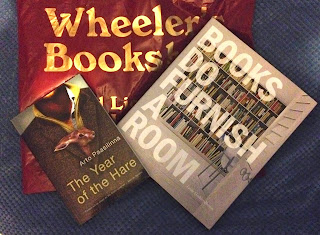