Indulging in some bookshop fantasy

A few months ago I devoured the first book by a new-to-me author in a matter of days. It was an epic story of life, death, love, learning, music, friendship and more and when I finished the last sentence I was broken.

Not by the book, but by the absence of its sequel, which I desperately wanted to pick up and start reading but hadn't yet bought. The first book had consumed me, grabbing my attention in the way only a book can, so that at every possible moment I dropped what I was doing and returned to its pages. Then it was over and I was left with the impossible task of finding something else to read that would be even half as engrossing.

Admit it, most of you know what I'm talking about?

Only this time my challenge was made even harder because the book had specifically awoken a craving to read more from the same genre, and it's a genre that's not always found in independent bookshops. You see, when listing the many themes covered by this book I left one out, magic. The book was The Name of the Wind by Patrick Rothfuss and it's listed under science fiction and fantasy. I've previously written about my hunt for this book, finding it in a larger bookshop that had the luxury of space to stock what's possibly the least-loved of genres, and I don't in any way blame the majority of indie bookshops for being unable to hold such books – after all, a bookshop can still order in any title you want faster than the internet can have you queueing in your Royal Mail sorting office... 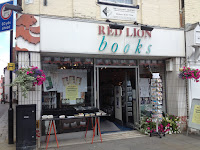 So what relevance does any of that have to this week's bookshop? Despite it being unusual to find science fiction and fantasy in many indies, this week's destination is known specifically for that genre. Given my reading state of mind, Red Lion Books in Colchester was somewhere I had to visit, and fast – I made it part of my Independent Bookshops Week 2015 bookshop crawl. 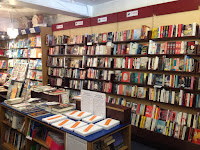 Found in a town centre location, the bookshop is large enough to rival a chain and was being enjoyed by a good number of customers during my visit. The front part of the shop houses mainly non-fiction, moving on to fiction and then books for younger readers, all of which would be more than enough to challenge the willpower of your average bookworm, but I was on a mission. I took a walk downstairs.

Almost the same size as the ground floor, I found myself in a room large enough to house events, more non-fiction and a good offering of local interest books, and the genre I was looking for. 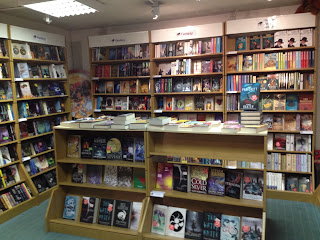 Taking up the space occupied by your average boutique indie, the science fiction and fantasy section is easily one of the largest I've seen on my bookshop travels. It was heaven. Moving from recommends, to sci-fi, to fantasy, to retro sci-fi (my guilty pleasure) and on to yet more recommends, I was spoilt for choice. Then there was the moment of (temporary) disappointment as I got to S in fantasy and there wasn't a single book by the author I was looking for, followed by sheer joy as I reached the next bookcase and realised Brandon Sanderson had been picked out and given a shelf of his own under popular authors. In case you're wondering, he's been recommended as someone who'll "get me through my Rothfuss cravings". 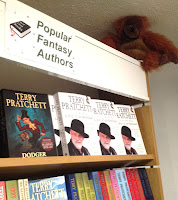 Choosing The Final Empire, Part One of Sanderson's Mistborn series, I found myself really struggling not to buy up the rest of the bookshelf, knowing it will be a while before I'm again treated to such a realisation of my bookish fantasies. Instead I stuck to my one book per shop rule and slowly moved away from the bookcase, which, incidentally, was topped by two rows of Terry Pratchett's works, overseen by an orangutan librarian. I'm not a fan but who wouldn't appreciate such a detail? 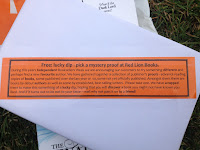 Back upstairs, I enjoyed the mystery proof lucky dip in honour of IBW2015, picking what later turned out to be Willow Trees Don't Weep by Fadia Faqir, before continuing on my road trip.

To finish, yes it'd be great if independent bookshops were able to stock more of the genre. But maybe that's what's so special about fantasy: it's not part of the every day. 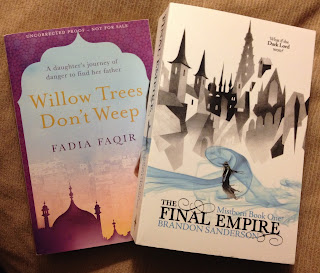