One of the things I've found that sometimes puts people off visiting bookshops is the fear of being out of place, of not knowing what to buy and of being judged for it.

The simple answer to such fear is to tell them it's nonsense, but it's hardly a helpful answer: It doesn't help them to understand why their fear is wrong, it merely makes them feel even more uncomfortable because of your rather superior lack of support.

Breaking the myth of such fear is one of the very many reasons I set up this blog, it's also why I repeatedly give examples of bookshops that take me out of my traditional comfort zone.

This week's bookshop is another such example, only this time instead of visiting on my own (so I would be the only one to see my shame should the unthinkable happen and I got laughed out of the shop) I was on The London Bookshop Crawl with 30 or more other readers – several of whom (mostly female, there are no stereotypes in this week's destination) had visited the bookshop before and were absolutely within their comfort zone. Imagine the shame if, in front of all of them, me who's visited at least 150 bookshops in the last two years managed to metaphorically fall flat on their face. 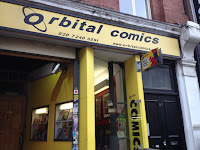 Okay, so I had the reassurance of experience and the resulting knowledge no bookseller worth their salt will ever laugh at a customer, but I was still a little nervous as I followed the crowd of bookshoppers heading into Orbital Comics.

Yes, you did read the name correctly. Orbital Comics is what can simply be described as comic and graphic novel heaven, and yes, that does make it a bookshop. A deceptively tiny shop front leads to a huge room stretching back what must be the space of at least four shops, meaning the stock is vast and the room large, bright and simply fascinating to look around when you spot all the comics lining the walls.

This is my first visit to a graphic novel shop so I found myself eagerly surveying my surroundings, from the bookcases of novels to the walls and tables of comics, including areas for comics published in the last week, two weeks, etc. This shop is as much a visual treat as it is a place to find something new to read. 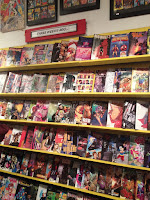 Recommends tables were filled with graphic novels to tempt me, but I'd done my homework and had a particular title I wanted to start with, Battle Royale. Typically, I hadn't done my research that well as in the excitement of the bookshop I couldn't remember the author's name: I went in search of a bookseller to help me out. They immediately took me to the right bookcase, where sod's law dictated someone had recently left a gap after buying the novel themself. A spin-off was available next to the gap but I like to start at the beginning. It was time to be honest. 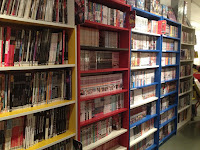 I admitted to the bookseller this was my first visit – would in fact be my first ever graphic novel purchase – and asked for his help. Unphased, he asked what I usually read and what I was after in a graphic novel and then said to give him a minute to look around. He soon returned with his first recommendation, Transmetropolitan, Back on the street by Warren Ellis and Darick Robertson. Ordinarily I'd be fussy and ask for a few options to choose from, but his synopsis grabbed my attention and made the sale. 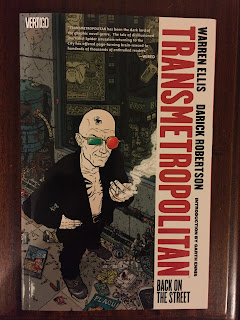 Orbital Comics is around the corner from Charing Cross Road and a mere hop, skip and a jump from Leicester Square, and now we've been introduced I'm sure it'll become a regular haunt among my London bookshop travels. Not only did the bookshop succeed in welcoming me and making me feel at home, it also introduced me to a new-to-me genre, and one I look forward to delving deeper into.

@orbitalcomics
Posted by Erica at 23:20