Bookshops are sensible places, where people go to buy books and be quiet and learn. Aren't they?

Well, to a certain extent yes they are. Some can be sensible, while others can be quiet, and all do provide us with wonderful books to read, enjoy and learn. Whereas some bookshops – even when they're not necessarily trying to be – are all about running around and having fun.

Okay, so we didn't actually run around this week's bookshop, but we did play... 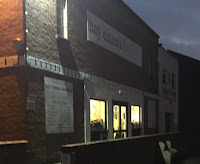 Hay Cinema Bookshop in Hay-on-Wye may not be the world's largest bookshop, but during our visit it certainly felt like it was. Set within a converted building, rows and rows of shelves spread across several rooms and two floors, with the only nod to its former life being in the layout of the front till area, which reminded me of the reception area of a Welsh cinema I used to visit in a different time. 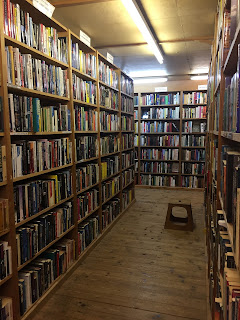 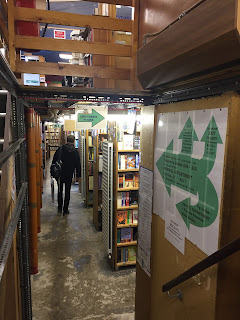 Having been greeted at the door, we made our way into the bookshop proper and giddiness overtook us. It began with the simple delight at finding so many rows and rows of bookcases of secondhand books, the sight of which being enough to spark joy in the heart of any reader. Then we started exploring and losing each other in the stacks and the playfulness really began. One of us would pause to look at a section or book, losing the other as they continued exploring and before I knew it we were lost in a bookshop game of hide and seek.*

I admit this is not the most mature way to spend time in a bookshop, but it was a lot of fun and ensured we covered every aisle of the space – which really did feel huge. It meant I saw everything from fiction to individual shelves about authors, history (masses of it), sciences, natural history, remainders and large areas of overflow because there were more books than could quickly be given appropriate homes. We found a row of books about Thomas Mann and another that somehow managed to include all the difficult classics I've wanted to read but not quite worked up the courage to try, and we found shelves and shelves of glorious books.

There's not much more I can say about this bookshop, other than repeating the fact it was a joy to explore. Our purchase (he bought for me) was Hermann Hesse's The Glass Bead Game – from among the titles I keep wimping out of – and as we chatted at the till we were told the bookshop is linked with Quinto Bookshop on London's Charing Cross Road, which happens to be another regular haunt of mine (I'll add a write up here soon).

Hay Cinema Bookshop is a massive, book lover's paradise of a space and while I'm not suggesting you visit to go running around, I defy anyone to not be tempted to hide and seek your companions (human and printed) among the shelves. 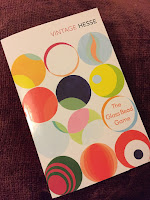 
*Technically, I think my boyfriend won.
Posted by Erica at 09:07