My introduction to Terry Pratchett

My bookshop visits – like the bookshops themselves – can be inspired by all manner of reasons, but this week's possibly has one of my oddest reasons for visiting: I had a drink with a friend and she was wearing scythe earrings.* 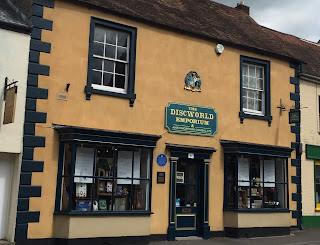 I don't know much about Terry Pratchett, but what I do know is that one of his characters is Death, and Death carries a scythe. This one fact was enough for me to be the only person to have put two and two together and ask her about the earrings, it was also enough for her to convince me a visit to Discworld Emporium in Wincanton was in order. For those in the know, this is obviously a bookshop dedicated to the works of Terry Pratchett, but believe it or not, there are those of us who live in relative ignorance of the popular author's legacy.**

My childhood reading went from Ladybird books to Sweet Valley High to whatever I could find on my Gran's bookshelves and so, sometime in my teenage years, when all my friends suddenly started quoting lines from Pratchett at each other I had no idea what they were talking about. Initially, it felt like they'd joined some kind of cult, conversing in quoted sentences that meant absolutely nothing to me, but after a while it became frustrating, so when I did get the chance to read one of his books I rejected it, having been put off by not being part of the gang.

However despite this rejection I did grow to have a respect for the books and their author, and I was pleased by the number of people whose reading adventures had begun thanks to Terry Pratchett's writings. Not that this helped when I arrived at Discworld Emporium and realised how little I knew about his books and characters.

Arriving at the bookshop, the front is both understated and striking, as a sign for Ankh-Morpork swings above the door, which has an amusing blue plaque to one side, but what's really impressive is the inside. 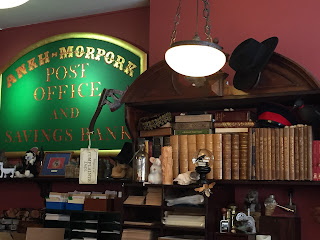 To the left of the door is the main area of bookshop, which includes copies of every book Terry Pratchett contributed to as well as stationery, games, Discworld memorabilia and, obviously, a selection of jewellery. Then to the right is a slightly partitioned off area, where the staff were sat chatting while wrapping up parcels to be posted elsewhere. 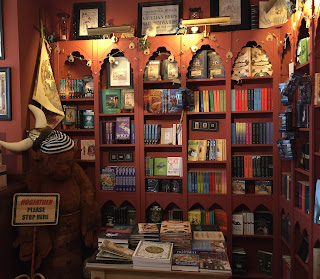 None of this truly enables you to visualise the room. It's dark wood, with the look of a gentleman's library and an atmosphere of warmth and welcome. An orangutan presides over the books, and all about there are details which I'm sure all Pratchett fans will appreciate, I certainly did.

My ignorance of all things Pratchett meant I had no idea where to start with the books and so as the booksellers sounded so cheery I decided it would be best to own up and ask their advice. It felt a little wrong going to the counter and admitting I'd not read a single book by the author, but my ignorance wasn't held against me and the conversation felt a little like I was being welcomed into the fold.

Anecdotes were shared, books discussed and a friendly dose of rudeness in the context of the characters was also dispensed as I was introduced to the appeal of the Pratchett world. Wyrd Sisters was the eventual recommendation (and having since devoured it I can finally see why the books are so popular), while my boyfriend, who has previously read a little Pratchett, opted for Mort. Upon opening our bag later we also discovered a selection of mint humbugs and our receipts – from the Thieves' Guild.

Discworld Emporium may be a very focused specialist bookshop, but as a treat for fans and an inspirational destination to nurture young readers it must surely be considered a worthy destination. Only take care to choose the date of your visit wisely, like the whimsical nature of Pratchett's books the bookshop doesn't open to the usual hours. 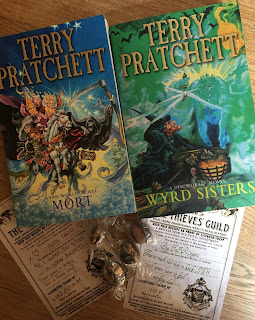 *No, I'm not sharing a photo of the scythe earrings, if you want to find out what they look like you can jolly well go to the bookshop yourself to find out!
**Prior to this visit my knowledge stretched as far as Death, the play of Mort, Discworld, the tortoise and, obviously, the orangutan librarian.
Posted by Erica at 23:05