The internet is a fickle beast

The world wide web is somewhere I both love and hate when it comes to its role in the world of bookshops.

It's vital for publicity and as a signpost to help people find the way, but it's also the home of their biggest rival.

For the former the internet can also be very misleading, with out of date or confusing listings or maps, broken links and any number of technological stumbling blocks to scare away customers or even just overlook the bookshop's existence. A fact that was highlighted when I took a recent visit to Westerham in west Kent.

A last minute work trip, I knew I'd have a lot of free time to go bookshopping, but only had one evening to do my research and see what treats might be available. And so I turned to the internet, typed bookshop into a popular search engine, and began trawling the results.

And I hit the jackpot. Barely Read Books, just off the green, had countless results, inviting me to visit and snap up a secondhand book. It was too late to phone the shop to find out more but - as I'm teaching myself to be more internet savvy - I turned to the map facility and took a look at the shop front and surrounding roads. Easy.

However, as I was on a roll I thought why stop at one bookshop? There might be more nearby. It would be rude to drive all that way and ignore them. I zoomed out a bit on the map and three more bookshops jumped out at me. Perfect, I thought, as I set out on my road trip along the A25 the following morning. 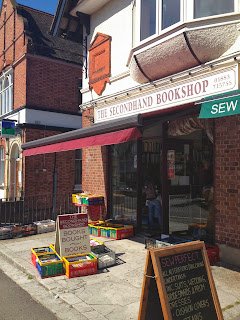 Crossing the border into Surrey, first up was The Secondhand Bookshop on Station Road West in Oxted. Crammed with so many books the shelves are stacked two-deep, I was particularly fascinated by the large collection of old Penguins displayed in colourful groupings of orange or green.

A man I assume to be the proprietor was reading by the door, and so I followed his lead and soon found myself in one of my favourite places - sat on the floor scouring the shelves of fiction, pulling out the books and piling them up around me. You know you're in a good bookshop when no one bats an eyelid at book fortress building.

My joy grew as my delving uncovered a large selection by Emile Zola, a favourite from my thoughtful teenage years whose Rougon-Macquart novels I've always wanted to finish working my way through. The Earth was mine as I reluctantly left the shop.

Crossing the neighbouring train station I made my way down Station Road East to Paydens. 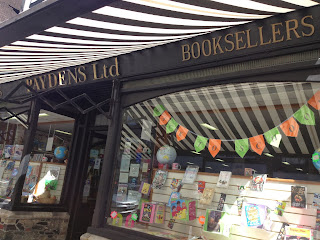 A relatively large shop, the front half is dedicated to new books and the back to stationery and art supplies. I admit I initially found myself wondering about the bookshop status of what felt like an independent WHSmith, however, given that I was surrounded by shelves of tempting reads my doubt didn't last long. I was then further reassured as I heard the ladies at the counter talking books with a customer and saw all the invitations to order my book if it wasn't in stock. I dithered over my choice, almost picking one of their featured books (which a week later was shortlisted for the Man Booker prize) but eventually being drawn to John Green's The fault in our stars.

For a small town Oxted is well covered if you need to buy a book, or two. 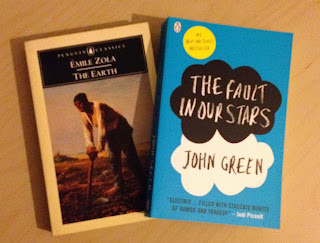 Next on my list was the one bookshop with a question mark by its name. The Limpsfield Bookshop in the nearby village of the same name. The shop had listings in various phone and address directories, and appeared to be on the map, but otherwise there was no trace of it online, making me fear it had perhaps closed down, I had to investigate. 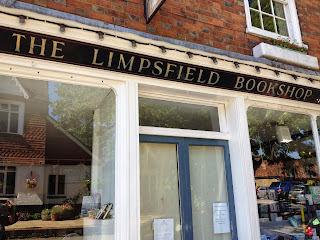 Limpsfield is a small, pretty village just off the A25, appearing to be a mostly linear settlement it wasn't difficult to spot the attractive window with books peeking out. Unfortunately it also wasn't difficult to spot the sign saying the bookshop was closed for a two-week holiday (my visit was a few weeks ago). Gutted, I peeked through the windows at what appeared to be a nicely spaced and well stocked new bookshop. I must return - once I've phoned ahead to confirm their opening hours.

Feeling a little dejected, I reassured myself that now I was at least on my way to the popular Barely Read Books and sure to end my travels on a high note before I got stuck into my work assignment.

My excitement levels rose as I entered the town, surrounded on all sides by independent shops and their many customers, I knew I'd come to a good place. There was the village green ahead of me, I'd just do a quick drive past the bookshop before finding a place to park... but... where was the bookshop?

Instead of the red and white front and boxes of books I'd been anticipating, there was a bright, lightly coloured something else. Too stunned to even take in what was being sold instead of books, I parked the car and did a circuit of the green on foot - surely I'd just mixed up my compass points and was looking at the wrong shop front? But no, I eventually asked a passer by, who sadly told me they couldn't remember when the bookshop had closed. It had been gone for a while.

Given the statistics for bookshop closures I know two and a half out of four is actually a pretty successful outcome to my road trip, and I'll certainly be returning to the area for a couple more Zolas and to increase my success rate to three, but I also learnt an important lesson.

The internet can be a very misleading place.