Discovering the worlds between pages

I've been very disorganised recently. Which is probably a bit of an understatement, because by disorganised I mean "pretty much useless at regular blogging" and you can translate "recently" as for the entire of 2017, plus a bit either side. For 2018 I'm not making any resolutions (been there and done that), but I am attempting to make amends. 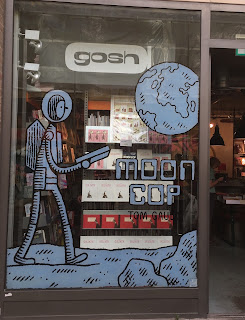 First on my list of amends is writing about a bookshop I officially visited way back in October 2016. Had I not been back since, I think this length of time between visit and blog would probably make the review null and void, but as I've returned to Gosh! Comics several times I can confirm it's still as appealing as it was during that first, fondly-remembered visit.

As mentioned very briefly in the write-up of the bookshop crawl this was a part of, there was a time when the word 'comic' would've had me outright rejecting this as a bookshop. Age and experience have helped me to know otherwise.

Despite this change of heart, I admit graphic novels are still a relatively new addition to my reading selection, so I'm probably at the level of novice when it comes to commenting on this bookshop's contents. I could see for myself it had a great atmosphere and was bright, colourful and appealingly cool, but I had to look to others to judge the quality of the books. A quick look around told me the customers believe Gosh! is getting things right.

The shop was packed with youngsters, teens, twentysomethings and older. Admittedly the numbers of those visitors dropped as age increased, but there was a wide variety of browsers, and all were enjoying their chosen area of bookshelf.

The comics area downstairs was inevitably popular, but on the ground floor the graphic novel is king and that was where I felt most at home. Graphic novels are as familiar as books, and while I may not have known much about the authors and styles I decided to follow the lead of others, looking at what appeared to be most popular on the recommendations tables, or waiting to find a space near the busiest shelves. It seemed a good place to start and helped me to familiarise myself with the books and the sections. 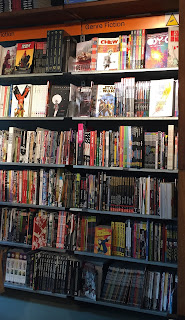 It also paid off, because when I eventually did find my way to the front of the crowd near what happened to be the busiest shelves during that first visit I spotted a copy of Nimona by Noelle Stevenson. It had been recommended to me by a friend who I already knew to have excellent reading taste, so I like to think bookshop fate played its part in leading me to it – and more purchases since.

As a dedicated traditional book buyer, I admit graphic novels are a concept I'm getting used to in a slow burn sort of way. They'll never replace regular books for me but they are becoming a fine addition to my reading habit, and likewise I'd hope regular books will play a similar role for those who were encouraged into reading via the path of graphic novels.

Gosh! Comics must also have a valuable part to play in this journey, introducing even more readers to the endless possibilities of worlds between pages. 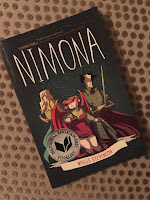