New year's resolutions annoy the hell out of me. Everyone's tired, poor, hungover and cold as they recover from the joy (or nightmare) of Christmas and the sudden start of a new year is looked upon as the answer.

I understand the reason people make resolutions, but they drive me mad when less than a month later – so I'm guessing I'm publishing this too late – the person gives up on their resolution, declares the year a failure and doesn't achieve anything. Okay, it's not that black and white, but it is true that many people seem to think new year's resolutions are going to have an instantaneous effect on their lives when the key is in the name: they're a resolution for the whole year.

Despite having this opinion, I do also see the benefit of making the decision to change. Which is why on 1st January 2016 I posted a photo to my non-bookshop Twitter account, listing eight new year's resolutions: 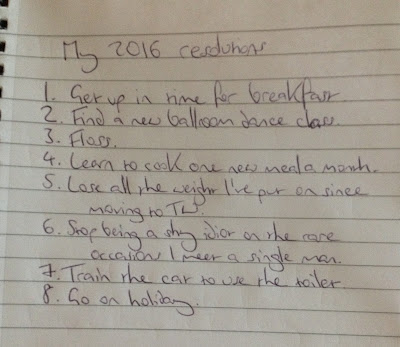 I posted the list half expecting to be mocked, but mostly because I knew the only way I'd properly act on it was if I had the support of my friends. Some were amused, but mostly the comments were positive and I kept the picture pinned to the top of my profile for six months before eventually feeling I'd progressed enough to go it alone.

Below is a look at how I did, listed in the order I think it would be most appropriate to read should you choose to go through them all. Otherwise, just click on the one that's of most interest to you.

7. Train the cat to use the toilet
3. Floss
6. Stop being a shy idiot on the rare occasions I meet a single man
5. Lose all the weight I've put on since moving to TW
4. Learn to cook one new meal a month
1. Get up in time for breakfast
8. Go on holiday
2. Find a new ballroom dance class