The annual autumn Bookshop Day as part of the Books Are My Bag campaign is always going to be particularly special for me, because it's the event that first set me off bookshop crawling.

I'd done the odd two-bookshop days, but in September 2013, when this blog was barely a month old, I visited eight in one day. Technically alone, I had thousands of people keeping me company in my phone as I tweeted my adventure, and from that moment on I knew I'd always love bookshop crawls and the joy of sharing the bookshop love with anyone who cared to join in.

This year wasn't quite as ambitious as some previous years have been, but there were two very specific reasons for keeping things small:

1. Bookshop Day conveniently coincided with the official opening of a new indie.
2. I wanted to demonstrate how easy it is to take part in bookshop day if you don't live in London or in the same town as an indie.

More about point 1 later. As for point 2:

Over the years, the one sad thing about sharing my bookshop crawls has been the regular (but thankfully not large) number of replies along the lines of 'I can't take part because I'm not in London' or 'I can't take part because there isn't an indie bookshop in my town'. Now I admit the latter can be difficult for people in remote areas and/or who are reliant on public transport, but both of those complaints apply to my home town and in the course of one afternoon I still managed to comfortably drive to three different independent bookshops. 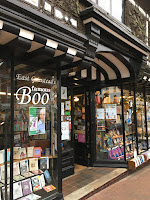 The crawl started with a 30-ish minute drive from my home town to East Grinstead, to see an old friend in the form of The Bookshop. It was drizzling slightly and very cold when we arrived, but the bookshop was easy to spot because of the crowd outside. A local author was proving popular signing copies of his books and a scout was doing well raising funds and awareness for an expedition she was due to take part in, with both next to an inviting chess board for anyone to sit and play. This combination created a nice buzz and I'm sure drew more people into the bookshop. 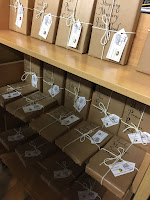 We had a wander to refamiliarise ourselves with the maze of bookshelves before I gravitated back to the front of the bookshop to the mystery books section. During my previous visit I'd enjoyed the randomness of this area and the temptation to again be introduced to something unexpected was too much to resist. It was also fun talking to other browsers as we tried and failed to guess the identity of the brown paper-wrapped books. My choice was battenberg, friendship, mystery, life, which turned out to be Three Things About Elsie by Joanna Cannon. I also got my hands on the Bookshop Day freebie, the short story Roar by Cecilia Ahern. Our visit ended with a nice chat with the bookseller, who I'd not met during my previous visit, before we had to head off to our next destination. 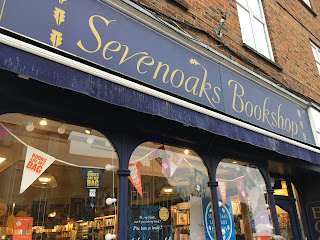 Sevenoaks Bookshop is another place I've previously visited, but not since a change of ownership. I loved it the first time around, so was a little nervous about returning for fear it might be different (it wasn't) and also out of shame at how long it's been since I last visited the nearest bookshop to where I live (hopefully the variety of bookshops appearing on this website explains the reason). I needn't have been concerned. Having been taken over by someone previously employed by the bookshop, all continues to be good here. I was also pleased to see how well my boyfriend took to our 20-minutes away local. 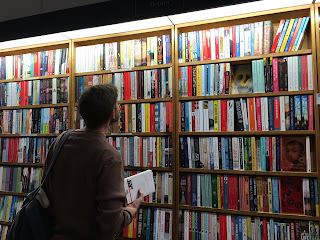 Within five minutes of entering Sevenoaks Bookshop we'd ordered tea and cake and my boyfriend had chosen two books to buy. Lots of browsing later (before, during and after cake) and he'd added to his pile and I'd found a book too. Between us we bought Tolstoy's War and Peace, Mann's Death in Venice, The Tangled Tree: A radical new history of life by David Quammen, and my choice of Maugham's The Painted Veil.

Our third destination saw us driving for a little longer as we headed over to Faversham, a town I've previously visited and loved for its secondhand bookshops, and somewhere I can now say I love for its new bookshop. 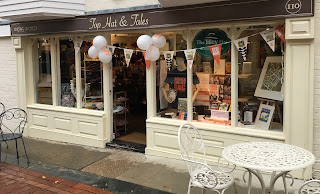 Top Hat & Tales was celebrating its official opening, and although all the festivities had ended by the time we arrived there was still a feeling of excitement as we entered the bookshop. Champagne glasses were liberally scattered around the shelves and a large bowl of cheese and olives tempted us from the corner of the room. More importantly the bookseller was obviously thrilled by how well the day had gone and was joyously recounting the highlights with others who'd been in attendance. It was wonderful to arrive and see such happiness. 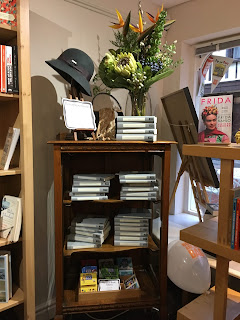 A half-and-half shop, Top Hat & Tales, formerly The Hat Shop, has been adapted by its owner to stock hats and books. As both areas can help improve the head I fully approve of such a combination, and again my boyfriend was impressed as he got caught up by the unusual selection of books on offer. For a new bookshop that had obviously been 'ravaged' by hoards of celebrants on opening day it really was very well stocked. I chose Watling Street by John Higgs, a book I've been looking out for since hearing the author interviewed by Cerys Matthews on Radio 6.

We really enjoyed our time here and both agree Top Hat & Tales is an excellent addition to the town's bookshopping offering. I look forward to returning soon so I can buy and then take my hat off to it.

So ended one of the shortest bookshop crawls I've ever been on. Short but sweet and all the other phrases that emphasise quality over quantity. The main aim being to hopefully encourage a few others to realise that a bookshop crawl doesn't have to be epic to be worth doing and – most importantly – if you're willing to travel to your nearest indie bookshop it'll definitely be worth the effort. 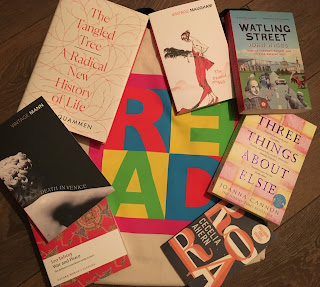