Last week saw London invaded by 30+ Twitterers intent on buying books. I have to admit I wish I'd come up with the idea myself, but what's more important is that I was lucky enough to be a part of the first official #LondonBookshopCrawl.

The event was organised by blogger extraordinaire Bex* and brought together book lovers from places including Oxford, Southampton and the Isle of Wight, making my early start to travel from Kent seem like nothing.

Bex has already written about the day, and this Storify captures some of the highlights, so I’m not about to repeat everything, but I couldn’t let such a fun event pass without sharing it with you.

First up was Foyles. One of the largest bookshops in London, it was a natural place to start and I arrived in the café to find a handful of people breakfasting on tea and cake while the hardcore were already out browsing the shelves. As I'd travelled from such a long way** I opted for the latter, munching my way through a second breakfast while I got to know some of the random assortment of readers I'd be spending my day with.

Making our way down Charing Cross Road, I was particularly excited about the second stop on our itinerary because (I’m a little shamed to admit) I’d not heard of it before I’d signed up for the London Bookshop Crawl. 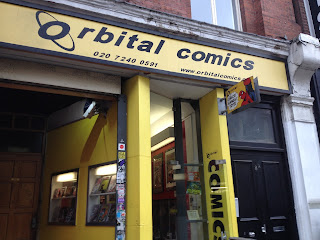 Orbital Comics is probably somewhere purists would argue isn’t a bookshop, but I loved the place and given a good proportion of its shelves are graphic novels I’m more than happy to include it here. As an innocent to the genre I was particularly pleased there was a helpful bookseller on hand to advise me. For now all I’ll say is I bought Transmetropolitan, Back on the street by Warren Ellis and Darick Robertson – come back soon for a full write-up about what can only be described as comic and graphic novel heaven. 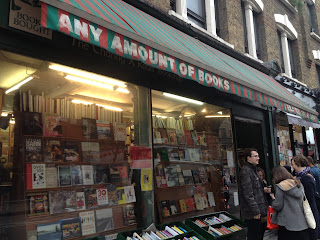 From the new to the old, we next visited Any Amount of Books. A favourite stop on the way to Charing Cross Station, this bookshop is a regular haunt that’s yet to appear on this blog. Packed with secondhand gems, I was thrilled to find Patrick Modiano’s The Search Warrant, and look forward to telling you more about this visit another time.

Next up was Cecil Court, where a wealth of rare bookshops are to be found, including Goldsboro Books, where I had to stop myself handing over my savings for a first edition of 84 Charing Cross Road (I should start with a paperback). 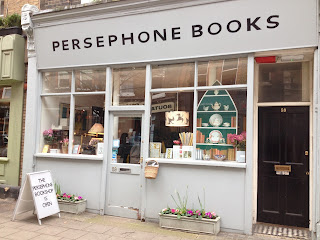 After a stop for lunch we reconvened for a walk to Persephone Books, which I have to admit I'm already in love with. It's a bookshop and publisher I always feel safe to turn to, certain that whichever grey-covered book I pick up I'll soon become immersed in its world, so when the bookseller gave us a presentation about Persephone I fell even more in love. Afterwards she chatted to us individually and helped us make our selections, uniting me with The Priory by Dorothy Whipple and a bookmark to accompany another Persephone purchase made elsewhere (each book's endpapers and matching bookmark are a work of art). 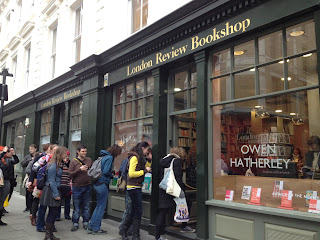 Moving on to London Review Bookshop, we made the most of their recommends table – which I still insist is one of the most unusual you'll find in any bookshop – while a few lucky crawlers found space in their cake shop. Sticking with the books, I was thrilled to find a copy of Herman Melville's Moby Dick, which I've vowed to read this year. 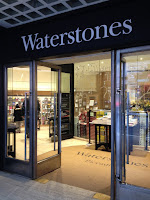 The final stop on our crawl was Waterstones Piccadilly. Apparently the largest bookshop in Europe, I have to admit I've not knowingly visited before. While here we paused for cake in one of the bookshop's many cafes before spreading out among the shelves. I'll tell you more about this immense bookshop another time as it could easily fill several blog posts. Here I – like many other crawlers – accepted a recommendation from Katie for my choice of purchase: The long way to a small angry planet by Becky Chambers. 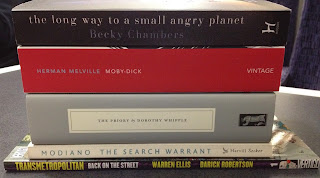 It was at this point the bookshop part of our day came to an end and I had to say my goodbyes and head back to Kent.

As regular readers will know, I'm no stranger to bookshop crawls and often take myself off for meandering explorations, so I'm used to cramming many more stops into a day when bookish greed gets the better of me. But the joy of sharing the bookshopping experience with such a lovely bunch of people meant the London Bookshop Crawl is my favourite of them all. Who's coming to the next one?